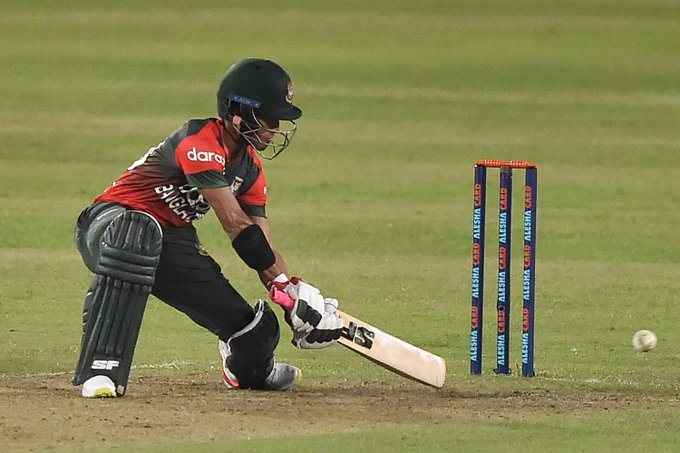 Bangladesh handed Australia their second defeat in a row to go 2-0 up in the five-match T20I series with a five-wicket win in the second match.

Bangladesh are now on the cusp of making history – their first ever bilateral series win over Australia in any format.

Mustafizur Rahman starred with ball with returns of 3/23 while Afif Hossain, who top-scored with a 31-ball 37* for his side, was adjudged Player of the Match.
Earlier, reeling from their first ever defeat against Bangladesh in the shortest format, Australia opted to bat. And yet again, it wasn’t the best of starts for the visitors with the early departure of Alex Carey (13) leaving them on the backfoot. His opening partner Josh Philippe soon followed suit, being bowled by Rahman for 10.

Mitchell Marsh and Moises Henriques would go on to establish a steady stand for the visitors, giving them some confidence of posting a challenging total on the board. But Shakib Al Hasan (1/22) worked his magic with the ball, plotting the downfall of Henriques on 30.

The middle-order failed to give any sort of support to Marsh, who was again tasked with the effort of embarking on a one-man job of saving the Australian innings from a collapse. But his dismissal on 45 by Shoriful Islam (2/27) meant that Australia would stutter home to an under-par score of 121/7 in their 20 overs.

In reply, Bangladesh’s innings got off to a shaky start with Soumya Sarkar being bowled by Mitchell Starc (1/28) for nought. Mohammad Naim too could not carry on his good form, with Josh Hazlewood (1/21) knocking over his stumps for nine in the fourth over.

Shakib and Mahedi Hasan then put on a 37-run stand, which steadied the ship for the hosts. But Shakib’s dismissal for 26 to Andrew Tye (1/27) reignited Australian hopes, as they desperately sought a way back into the match, and the series.

From 58/2 at one stage, Bangladesh slipped to 67/5 in 11.5 overs. They lost Mahmudullah for a duck in the next over after Shakib’s dismissal, and Mahedi was stumped by Matthew Wade for 23 two overs later.

Australia had derailed Bangladesh’s chase and they were back in the game, but Hossain and Nurul Hasan (22* runs from 21) had other plans. Together they ensured there weren’t any more hiccups on the way to their target. They batted with caution and stitched an important, unbeaten 56-run stand, taking their side across the line with eight balls to spare.

The two sides will meet again at the same venue for the third match on Friday, 6 August. (Courtesy ICC)