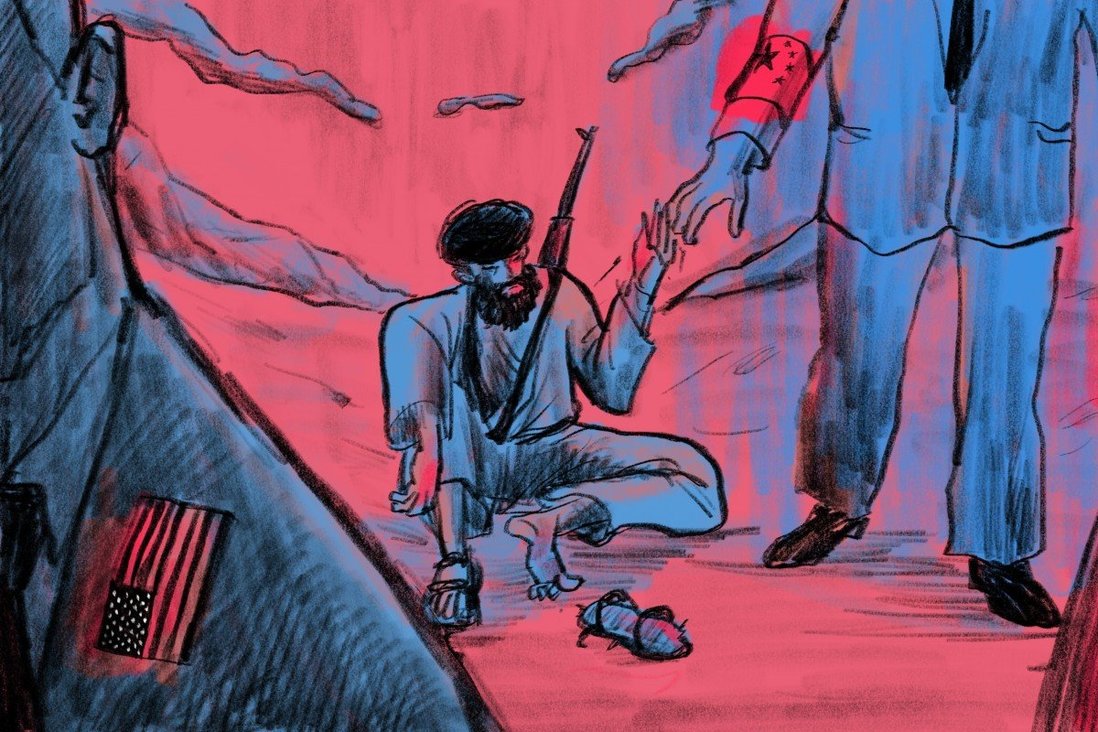 No sooner had US deputy secretary of state Wendy Sherman left Tianjin after tense talks with Chinese officials last week, than a Taliban delegation arrived at the same hotel from Afghanistan.

It was a clear message that Beijing will forge its own strategy with its neighbour after calling the US policy towards the war-torn country a failure.

As the September deadline for the withdrawal of US troops approaches, relations between China and the resurgent group were elevated on Wednesday, with Beijing’s assurance that it will back the Taliban’s role in Afghanistan’s security and reconstruction.

“The Taliban in Afghanistan is a pivotal military and political force in the country, and is likely to play an important role in the process of reconciliation and reconstruction in Afghanistan,” Chinese Foreign Minister Wang Yi said during talks with the delegation led by Taliban co-founder Mullah Abdul Ghani Baradar.

The talks were held in the same Tianjin hotel where Sherman met Wang and other foreign ministry officials on Monday. Sherman called on Beijing to cooperate with the US on regional issues, including Afghanistan and Iran.

The US has intensified air strikes against the Taliban, which has seized at least half the country.
“The withdrawal of US and Nato troops is basically a representation of the failure of US policies towards Afghanistan,” Wang said.

China’s official stance on the Afghanistan issue was to uphold the principles of “Afghan-owned” and “Afghan-led” and oppose interference from foreign forces, he said.

Diplomatic observers said China was still far from recognising the group as the legitimate government, but was preparing for the possibility that it would take over if national reconciliation failed. Closer ties with the Taliban are seen by Beijing as crucial for its counterterrorism efforts and economic interests in the region.

“The Afghan Taliban can play a unique role in restraining the security threat imposed by the East Turkestan Islamic Movement (ETIM) to China, due to the Taliban’s connection with the group,” said Gu Dingguo, a research fellow at East China Normal University specialising in studies of China’s neighbours.

Beijing holds the ETIM responsible for violent attacks in Xinjiang, and Wang pressed Baradar in Tianjin for an assurance that the Taliban would cut its ties with the group. Taliban spokesman Mohammad Naeem said after the meeting that Baradar had pledged Afghan soil would not be used to pose a threat to China’s security.

“The Taliban is the main object that China wants to stabilise in the national reconciliation talks in Afghanistan. Reaching national reconciliation is significant to Beijing’s Belt and Road Initiative, the road map of which passes through Central Asia. The spillover of Afghan turmoil to other countries in the region will pose a great threat to the vision,” Gu said.

The CPEC gives China an alternative route for oil and gas from the Middle East and Beijing has called for a “substantive expansion” of the route to include Afghanistan.

China’s engagement with the Taliban serves the interests of both sides, according to Richard Ghiasy, a senior fellow at the Leiden Asia Centre in the Netherlands.

“China has fully come to realise that there can be no sustainable peace in Afghanistan without a political role for the Taliban. After all, 20 years, trillions of dollars, and a huge military could not eliminate the Taliban,” he said.

“In the case of Afghanistan, the Chinese authorities must surely be hoping for a political settlement and power sharing architecture that is inclusive and represents the interests of all Afghans. If not, then anti-Taliban [ethnic] forces will continue to fight for their beliefs and freedom and a sustainable peace will still be distant.”

For the Taliban, engagement with and recognition from China was a boost to its legitimacy, he added.

Yan Wei, an international relations professor at Northwest University in China, said it was necessary for both the Taliban and China to engage each other, given the group’s heavy influence in Afghanistan. But he said Beijing remained cautious about the Taliban and the engagement was limited.

“If the Taliban overthrew the current government and came to power, the premise of China’s recognition of its regime is that it can be widely recognised by the international community.”

Both Yan and Gu said China’s greatest hope for Afghanistan was not a Taliban government, but rather national reconciliation, seen as more likely to bring peace and stability to China’s neighbouring area.

“After all, the Taliban have long-standing ties with extremist religious forces in Central Asia and outside the region. The possibility that the Taliban will establish a theocracy like they did in the 1990s can’t be ruled out,” Yan said.

“Despite the positive signal the Afghan Taliban recently released, it can’t be guaranteed that their promise can be realised after they take over power, given the composition of the group is complicated and there are divergences within it. It remains a question whether those hardliners influenced by extremist forces can match their words and deeds after taking power.”

Gu added: “China prefers to deal with a regime that separates politics and religion, and hopes to see the Taliban become a political party that participates in politics which also recognises the current government.”

But Derek Grossman, a senior defence analyst with the Rand Corporation, said China would prefer any outcome that met its two national interests – maintaining stability in Xinjiang and natural resource extraction in Afghanistan.

“First, the hope in Beijing is that the Taliban, if they retake power in the coming weeks or months, will rein in any Islamic extremist forces who might support perceived separatists in China’s northwestern province of Xinjiang,” he said.

“China wants to access natural resources under Afghanistan’s mountains, which are estimated according to one report in 2014 to be valued at nearly one trillion dollars. Afghanistan, however, will only become accessible to China if it can first be stabilised. So, that could mean national reconciliation would be acceptable if Afghanistan becomes more stable as a result, but it could alternatively mean Beijing would be OK with the Taliban retaking power.”

Taliban spokesman Suhail Shaheen earlier this month called China a “welcome friend” and vowed to protect Chinese investors and workers in Afghanistan, saying it would not allow China’s Uygur separatist fighters to use Afghanistan as a safe hub.

An earlier Taliban delegation to Beijing in 2019 met Deng Xijun, the then-special representative for Afghanistan. The two sides have also held multiple low-profile meetings over the years, which have been reported by media outside China, but rarely confirmed by Beijing.

“China, along with the US, used to help the Taliban fight the former Soviet Union in 1990s, and has maintained relatively close relations with the group ever since,” Gu said. “Engaging the Taliban can also help China strengthen its influence in the Islamic world, where the US has few friends.”

According to Grossman, one reason for the Taliban’s engagement with China is because the group does not want Beijing to unite with other powers in a bid to contain it.

“The Afghan Taliban does not want to see China leveraging its close partnership with Pakistan to in turn put pressure on the Taliban,” he said.

“Taliban attacks on Chinese interests in Afghanistan could result in heightened tensions between Beijing and Islamabad. If the latter does not commit enough to stopping attacks, then China and India might have a new-found common interest to undermine or eliminate the group.”

Gu said the Taliban needed China’s help in various aspects, including the reconciliation talks with the Afghan government and the economic reconstruction of the country if it seized power. (Courtesy South China Morning Post)