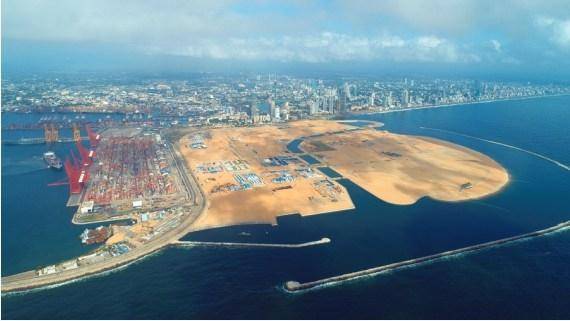 By a Special Correspondent

China always wanted to set up a strong base in Sri Lanka. It would provide two advantages to realize her geopolitical ambitions. First, it will be a direct challenge to naval superiority of any other countries in the Indian Ocean region. Second, China will gain a foothold in a critical commercial seaway and will be in a better position to secure its maritime trade of crude oil.

And going by the current developments in Sri Lanka, China seems well on its way to get a strong foothold in the country. The absolute control of the Colombo Port City and the 99-year lease of the Hambantota Port as well as 15,000 acres of land surrounding it in Sri Lanka are signs of Chinese expansionism taking root in the 21st century.

Sri Lanka recently passed the Colombo Port City Economic Commission Bill. The legislation gives China absolute authority in an area in the capital city of Sri Lanka. Opposition parties in Sri Lanka have alleged that the bill is intended to undermine the country’s sovereignty and create a Chinese colony. Sri Lanka’s Supreme Court, while hearing petitions against the bill, also said that certain provisions of it were unconstitutional.

Various provisions of the Bill go against the spirit of existing laws, or judicial pronouncements, or the socio-political realities of the nation. The Bill provides for the setting up of a Colombo Port City (CPC) Commission of five or seven members, as a one-stop decision-maker on all matters of SEZ. It is unclear if the incumbent government will use it as a model code for new SEZs of the Rajapaksas in politics or if it would be accepted or if a future government were to extend similar facilities to nations other than China.

The powers of the CPC Commission include clearing individual applications for ‘authorized persons’ to do business in the Port City (or declining them), tax-breaks, customs, VAT, and other export-import concessions for investors, and also exceptions from casino and gaming laws, amongst others. No such investment protection and/or concessions are now available to domestic and foreign investors, who have been in the business longer and with greater commitment to the country.

Unlike existing norms, private auditors, and not the auditor-general, who is a constitutional authority, alone can oversee the SEZ accounts. For the same reasons, the CPC is out-of-bounds for Parliament and parliamentary panels. This again is a travesty of the existing laws and practices, with the government being a partner with the Chinese promoter. The judiciary is being told to prioritize the SEZ cases, to make the foreign investors feel welcome and comfortable.

The Bill empowers the President to nominate five of seven members to the Commission, to the complete exclusion of the ‘collective responsibility’ of the Cabinet and/or Parliament. Needless to say, the President also has the power to sack any member or members unilaterally and replace them with any preferable individuals.

This is particularly unacceptable in a nation where the constant refrain of the civil society has been to reduce the exclusive powers of the Executive President, and make him/her accountable. Even when the current dispensation got Parliament to vote for the 20th Amendment, restoring the President’s powers. The 20-A also overturned a court ruling that (even) ‘dual citizens’ cannot become MPs, an impediment on their contesting the presidential polls.

Sri Lanka is now going to have a Chinese colony that will not only affect the nation’s sovereignty but also its culture in the long run. China is building the port city on reclaimed land near the Colombo Port and the $1.4 billion project is totally loaned and financed by China. Also, the bill allows the port city area to have its own currency and that means China may introduce the Yuan soon. China will regulate movement of the people in the area. The area may also see Mandarin language imposition, as, according to an IANS report, two recent big events in Sri Lanka saw signboards of government projects replacing Tamil with Mandarin.

So how has China got its way in Sri Lanka?

China sensed an opportunity to make inroads in Sri Lanka during the last phase of the 26-year civil war with terrorist outfit LTTE. The country, under the Mahinda Rajapaksa government, fought a bloody battle that ended in 2009. No country including India was ready to provide Sri Lanka with lethal weapons in the final days of the civil war. China realized it was time to move in. It supplied Sri Lanka with arms and ammunition and extended strong diplomatic support in the United Nations over the allegations of human rights violations. These moves made the existing Sri Lankan leadership heavily pro-China.

Years of civil war had largely ravaged Sri Lanka and the country desperately needed financial support to rebuild its economy and infrastructure. It was a golden opportunity for China based on the recent goodwill it had earned. The loan requirements of the Rajapaksa government saw a rapid increase and China never said “no” to any Lankan loan request. The past 15 years have seen Sri Lanka’s external debt rising over threefold mostly due to projects conceived by the Rajapaksa government in consultation with the Chinese. As per the Trading Economics website database, Sri Lanka’s external debt in 2020 was $49.211 billion, or 58.58% of the country’s 2019 GDP of 84 billion dollars.

This year, loans worth $4.5 billion are maturing in Sri Lanka, higher than its foreign exchange reserve base of $4 billion, as per a Financial Times report. That means the country is bound to take additional loans to settle even its maturing debts and a Rajapaksa regime back in power will find an easy solution in China.

In June 2018, the New York Times published a story, ‘How China Got Sri Lanka to Cough Up a Port’, that clearly relates to the Chinese intent. China’s designs behind a port on the southern coast of Sri Lanka were always strategic. Most of the feasibility studies done for a port in the small fishing town and found the product would never be commercially viable, especially in a small country like Sri Lanka. The island nation already had the strategically located Colombo Port and it was not advisable to develop another big port when the existing one needed expansion.

India and the US denied Sri Lankan requests for a loan to develop it but China welcomed it, though on conditions like China’s state-owned company with Chinese labourers would develop the port. Also, Beijing gave this loan to Sri Lanka on a higher interest rate.

Loans by global agencies like the World Bank or the IMF range between 1 to 3% interest rates. Many times, loans are given even at sub-one per cent rates. As per the New York Times article, the first loan for the port project, $307 million, was settled at 1 to 2% interest rates after the 2008 global financial crash. But when Sri Lanka needed more loans for the same project and approached China for it, with a loan request proposal worth $757 million, Beijing forced Sri Lanka to accept a higher interest rate and applied the same even to the first loan it had given for the project.

The first phase of Hambantota Port started operations in November 2010 but, as the feasibility studies had predicted, the port could never be commercially viable. Under mounting debt, Sri Lanka’s new government tried to renegotiate the debt repayment timeline. But China was not ready to listen. Instead, it asked for equity or ownership. Also, it demanded 15,000 acres of land around the Hambantota Port to develop an industrial zone to be controlled by China.

Sri Lanka’s new government under Maithripala Sirisena had no option but to agree to it. So, for a debt of $1.4 billion, China got a controlling stake in a port in Sri Lanka for 99 years.

Mahinda Rajapaksa’s frequent loan requests raised Sri Lanka’s government debt to around $45 billion in 2015, the year he lost the election. He was always seen as a person more than willing to accept the terms and conditions put by China. The result: much of Sri Lanka’s recent loans are from China, based on Beijing’s terms. Also, China released at least $7.6 million from a Chinese bank account of the Hambantota Port to support him.

Going by the past example, China may use its increasing foothold in Sri Lanka to increase its naval presence in the Indian Ocean region. A Chinese submarine docked at Colombo Port in November 2014. Current prime minister Mahinda Rajapaksa was president then. A similar Chinese request was refused by the Maithripala Sirisena government in 2017.

Now with the Rajapaksa brothers back at the top of the Sri Lankan government, the region may see increased incidents of Chinese ships and submarines being docked at Sri Lankan ports and a possible military presence in the future disguised in the name of securing its trade interests in the industrial zones that it is building and operating in Sri Lanka with its own currency and people.