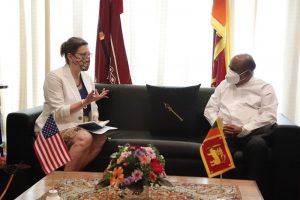 The United States hopes to provide another consignment of vaccines through the COVAX facility to help control COVID -19 in Sri Lanka, the US Ambassador to Sri Lanka Alaina B. Teplitz said.

She made the statement during a courtesy call on Speaker Mahinda Yapa Abeywardana today (02).

Marcus Carpenter, Deputy Chief of political division and Ms. Kushani Rohanadeera, Deputy Secretary-General of Parliament and Chief of Staff were also present at the meeting which was held at the Speaker’s Office in Parliament.

The Ambassador also informed the Speaker that the United States continues to support the development of Sri Lanka and protecting of the democracy in the face of COVID faced by the whole world.

Teplitz has been the US Ambassador to Sri Lanka since 2018. (Colombo Gazette)

US facilitates electrification of three-wheelers in Sri Lanka

US and India discuss situation in Sri Lanka