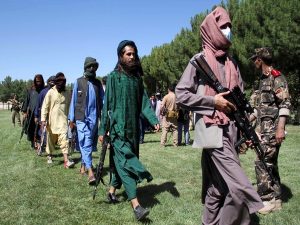 Kabul [Afghanistan], July 30 (ANI): Over 10,000 Pakistani terrorists have entered Afghanistan, said the Afghan government, adding that the Taliban terrorists are trained by a Pakistani institution and are financed by Islamabad.

A spokesman for President Ashraf Ghani said in a video message sent to media that thousands of terrorists enter Afghanistan from Pakistan to carry out the country’s proxy war, Afghanistan Times reported.

“We have accurate intelligence reports that more than 10,000 Pakistani have entered Afghanistan from Pakistan while another 15,000 are encouraged to come. This shows that a regular institution is training and financing Taliban,” the message said.

Prior to this, President Ghani had said that 10,000 foreign terrorists came from Pakistan to Afghanistan in a single month.

Early this month, Ghani lambasted Pakistan for not severing its ties with terrorist organizations groups and said that according to intelligence reports over 10,000 ‘jihadi’ fighters had entered Afghanistan in the last month, while the Imran-Khan Pakistan government had failed to convince the Taliban to “negotiate seriously” in the ongoing peace talks.

Addressing the inaugural ceremony of the Central and South Asia connectivity conference, Ghani had said “contrary to repeated assurances by Khan and his generals that Pakistan does not find a Taliban takeover in Afghanistan in its interest and short of use of force will use its power and influence to make the Taliban negotiate seriously, networks and organizations supporting the Taliban are openly celebrating the destruction of the assets and capabilities of the Afghan people and State.”
Ghani’s office has long emphasized that the Taliban fight Pakistan’s proxy war in Afghanistan.

Afghan officials accused Pakistan of providing air support to the Taliban and threatening to hit back if Afghan forces try to retake the Spin Boldak border area.
In the past few weeks, Afghanistan has witnessed a surge in violence as the Taliban has intensified their offensive against civilians and Afghan security forces with the complete pullback of foreign forces just a few weeks away.

A UN report said that terrorists from a variety of countries and militant groups continue to operate in Afghanistan.

The 28th report of the UN Analytical Support and Sanctions Monitoring Team said that Pakistan-based terror group Tehreek-i-Taliban Pakistan (TTP) has maintained ties with the Taliban as about 6,000 of its terrorists are on the Afghan side of the border (ANI)