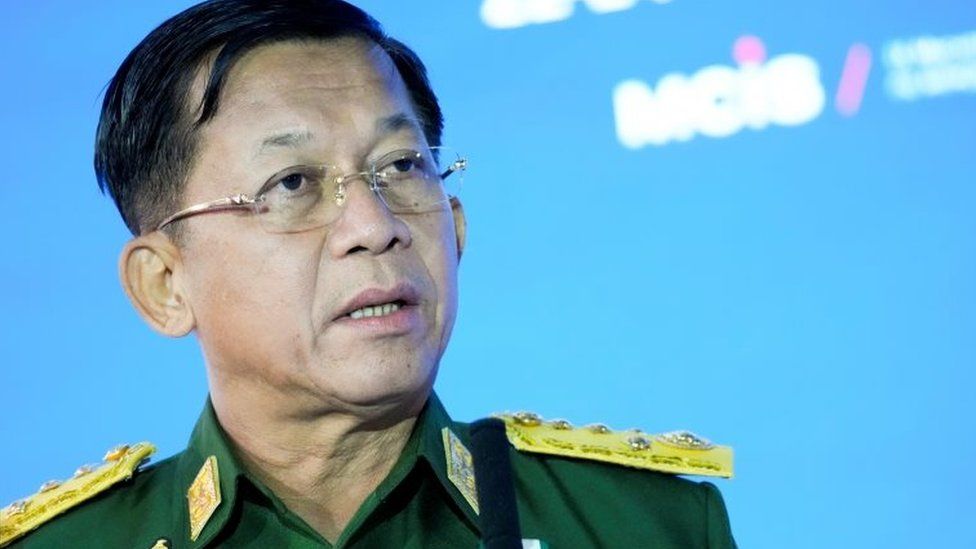 The general who took power in a coup in Myanmar in February has named himself prime minister and said emergency rule may now extend to August 2023.

In an hour-long speech, Min Aung Hlaing pledged to hold a “free and fair multi-party election” but also called the elected party he removed “terrorists”.

Hundreds have died in continuing protests against the military coup.

Many protesters were in the health care system, which has collapsed amid a massive surge in Covid-19 infections.

Myanmar has so far reported 300,000 cases and 9,300 deaths, although the limited testing available suggests those numbers are vast underestimates.

In the general’s televised speech he accused those opposing the coup of deliberately spreading Covid-19.

He spoke of “fake news and misinformation via social networks” about his government’s Covid policies, calling it a “tool of bioterrorism”.

The BBC’s Jonathan Head in Bangkok says this formed part of a strange speech, ranging from the need to grow more cotton and onions to condemnation of those trying to destroy the state and Myanmar’s traditions.

The general said Covid would be contained through more vaccines, extended public holidays and what he called the harmonious co-operation of the people.

But our correspondent says dozens of medical personnel have been arrested and many more are in hiding since the coup, while people seeking treatment say the military is turning them away from hospitals, and restricting access to oxygen, leaving many to die in their homes.

After the military seized power in February, a one-year emergency rule was announced.

But the nationwide civil disobedience campaign continues, with tens of thousands of workers sacked or on strike.

Just what those parties will be is unclear, with the general calling the ousted National League for Democracy (NLD) and its supporters “extremists [who] chose the act of terrorism instead of doing or solving it in line with the law”.

NLD leader Aung San Suu Kyi has been detained since the coup and faces a range of criminal charges.

Burmese human rights activist Aung Kyaw Moe told the BBC the general’s pledge of an election was “a lie and it’s not going to be happening… the people of Myanmar wouldn’t trust such kind of promises”. (Courtesy BBC)