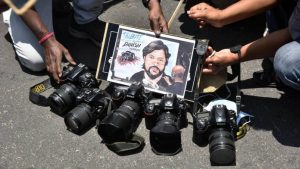 New Delhi: Indian photojournalist Danish Siddiqui did not die in crossfire but was “brutally murdered” by the Taliban, an opinion piece in US news magazine Washington Examiner said Thursday.

Siddiqui, who was working for Reuters, died on 16 July while covering clashes between Afghan security forces and Taliban in Spin Boldak district of Kandahar, which borders Pakistan.

“The circumstances of Siddiqui’s death are now clear. He was not simply killed in a crossfire, nor was he simply collateral damage; rather, he was brutally murdered by the Taliban,” stated former US Defense Secretary Adviser Michael Rubin, who authored the report.

Rubin is currently a resident scholar at US think tank American Enterprise Institute (AEI) and specializes in Iran, Turkey, and the broader affairs in the Middle East.

Siddiqui was laid to rest at the Jamia Millia Islamia graveyard in New Delhi two days after his death. He was part of the Reuters team that won the Pulitzer in 2018.

‘Siddiqui was alive when Taliban captured him’
The report said that according to Afghanistan authorities, Siddiqui travelled with an Afghan National Army team to cover clashes in the Spin Boldak region.

“When they got to within one-third of a mile of the customs post, a Taliban attack split the team, with the commander and a few men separated from Siddiqui, who remained with three other Afghan troops,” it added.

During the assault, shrapnel injured Siddiqui, causing him and his team to take refuge at a mosque where he received first aid, the report claimed.

In the report, Rubin claimed Siddiqui was alive when the Taliban captured him and that the Taliban verified his identity and then executed him, as well as those accompanying him. The commander of the Afghan National Army team and the remainder of Siddiqui’s team died trying to rescue him, it added.

The deliberate execution of the journalist and subsequent mutilation of his corpse shows that the Taliban does not respect the rules of war or conventions that govern the global community, stated the report.

“The real question for journalists is why the State Department continues to pretend that Siddiqui’s death was just a tragic accident,” Rubin asked in the report.

In a statement on 17 July, the US said it was “deeply saddened” by the journalist’s death and called for an end to the violence in Afghanistan. [ThePrint]