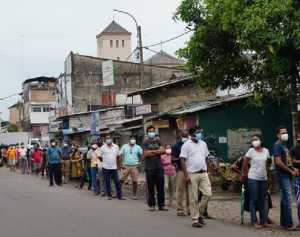 There was confusion and chaos reported at some locations today after the online registration to obtain the Covid vaccine was not accepted.

The online portal introduced by the Health Ministry in collaboration with the Information and Communication Technology Agency (ICTA) allows the public to pre-book an appointment to obtain the AstraZeneca vaccine.

However, despite a number of people registering for the vaccine and receiving confirmation messages via SMS, they were unable to obtain the vaccine at the given time.

According to some residents in Wattala, despite being issued the confirmation via SMS to receive the vaccine at the Vidyaloka Vidyalaya in Kerawalapitiya, they were turned away saying the vaccine was not being administered at the location.

However, hours later they were informed that the vaccination centre at the Vidyaloka Vidyalaya in Kerawalapitiya was accepting online registrations, yet many had missed the given time as a result of miscommunication and poor coordination.

When inquired by Colombo Gazette, the Public Health Inspector (PHI) in charge of the area Varuna Amarasekera said that they were not informed about the online registration process.

Similar incidents have also been reported from various other areas with many elderly people who had registered online being turned away after standing in line for several hours to obtain the vaccine.

He said the Army was only operating three centres in the Kadawatha, Kelaniya, and Negombo areas and the public could obtain their vaccines from the centres.

He said the Health Ministry was not directly overlooking the process and had designated it to the said departments.

Our attempts to contact ICTA in this regard were futile. (Colombo Gazette)