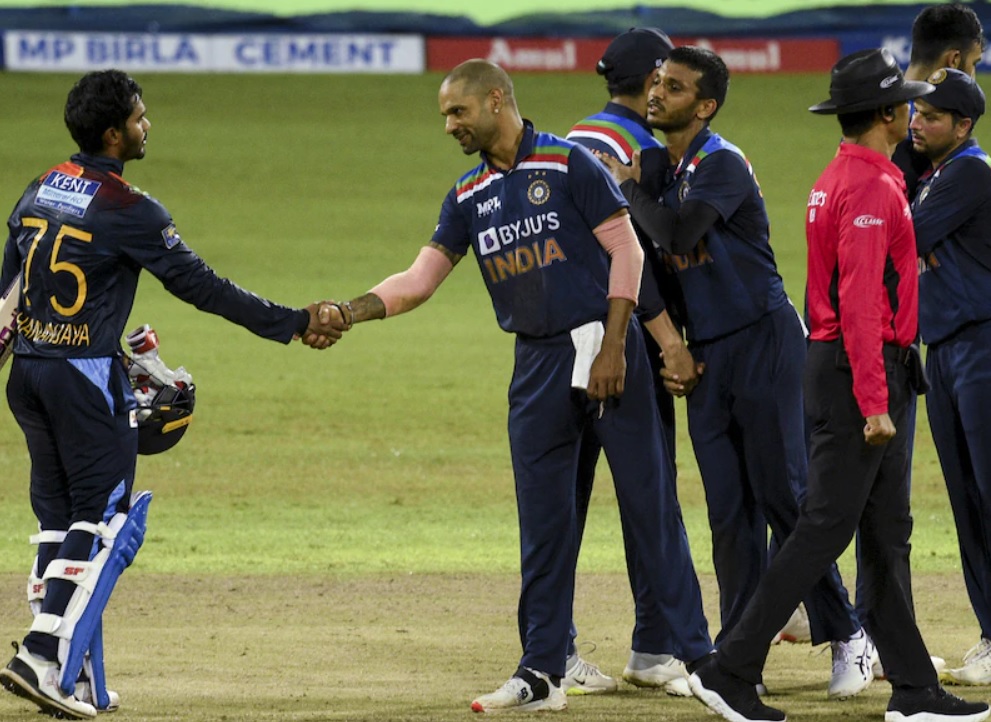 Chamika Karunaratne (12* off 6) and Dhananjaya de Silva (40* off 34) were Sri Lanka’s heroes as they chased down India’s 132-run target in a low-scoring in the 2nd T20I at the Premadasa stadium to square the series 1-1.

The home team needed eight runs off the final Chetan Sakariya over and got there with 2 balls to spare.

Sri Lanka had been reduced to 66-4 in the 12th over before Akila Dhananjaya and Wanindu Hasaranga began changing the course of the innings with a 28-run partnership. This was only Sri Lanka’s second win in their last 14 completed T20Is since October 2019.

India was forced to go with an unusually bowling-heavy playing eleven with all eight close contacts of Covid positive Krunal Pandya unavailable for selection. But 3 of their 6 bowlers at work–Kuldeep Yadav, Varun Chakravarthy and Rahul Chahar–became a formidable spin force on a spin-friendly surface, sharing four wickets to keep India in the contest.

In what has been a tour marked by many Indian debutants, there were four more on view on Wednesday–Ruturaj Gaikwad, Devdutt Padikkal, Nitish Rana and Sakariya. But India had to account for their light batting order which reflected in Shikhar Dhawan-Ruturaj Gaikwad’s low-risk approach in the powerplay (45-0).

Once Gaikwad fell in the seventh over after a good-looking 21, no Indian batsmen found scoring easy. The ball began to take sharp turn as Hasaranga (1-30), fresh from his move up to No.2 of ICC rankings, combined with the multi-skilled Akila Dananjaya (2-29) to keep the Indians in check. Dhawan 40 (42b) was the only one to get five boundaries but even his strike rate remained below run-a-ball. (Hindustan Times)