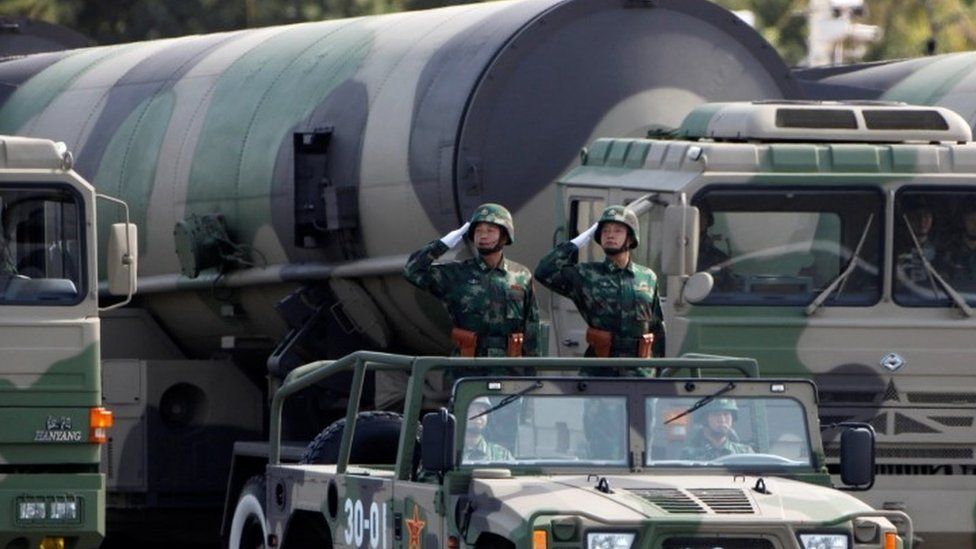 China is expanding its capacity to store and launch nuclear missiles, US scientists say.

Satellite images from Xinjiang province in the west of the country suggest it is building a nuclear missile silo field, a report from the Federation of American Scientists (FAS) says.

US defence officials have expressed concern about China’s nuclear build-up.

It is the second new silo field reported to be under construction in western China in the last two months.

The site could house about 110 silos, which are underground facilities used for the storing and launching of missiles.

Last month, the Washington Post newspaper reported 120 silos spotted at a site in a desert area in Yumen, in Gansu province.

The FAS said in its report on Monday that the new site at Hami, about 380 km (240 miles) north-west of Yumen, was at a much earlier stage of development.

In 2020 the Pentagon said China was set to double its stockpile of nuclear warheads, from a low base.

The news comes as the US and Russia prepare for arms control talks.

The talks, between US Deputy Secretary of State Wendy Sherman and Russian Deputy Foreign Minister Sergei Ryabkov, are being seen as a first step towards reviving stalled negotiations on reducing nuclear arms.

But China has so far not taken part in arms control negotiations.

The US Strategic Command, the part of the Department of Defense responsible for strategic deterrence, voiced its concern about the report in a tweet.

“This is the second time in two months the public has discovered what we have been saying all along about the growing threat the world faces and the veil of secrecy that surrounds it,” it said.

The silo field in Xinjiang was detected using commercial satellite imagery, but higher-resolution pictures were later provided by Planet, a satellite imaging company.

In 2020 China had a nuclear stockpile of more than 200 warheads and was aiming to at least double this amount, the Pentagon said.

The US has approximately 3,800 warheads, analysts say. (Courtesy BBC)