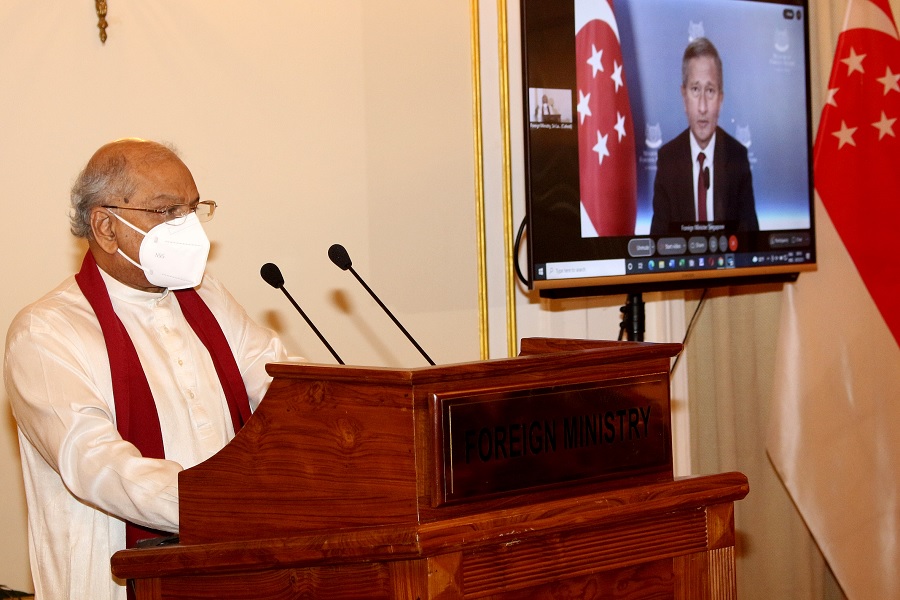 Singapore has noted the importance of the controversial Free Trade Agreement (FTA) signed with Sri Lanka.

Minister for Foreign Affairs of Singapore Dr Vivian Balakrishnan said that the Sri Lanka-Singapore Free Trade Agreement, which was signed in 2018, is an icon of the burgeoning economic ties between both countries.

He was speaking at a virtual ceremony held today to mark the 50th anniversary of the establishment of diplomatic ties between Sri Lanka and Singapore.

The current Sri Lankan Government had raised concerns over the FTA and had proposed several amendments.

“I want to start by thanking the Sri Lanka Post and SingPost for producing these exquisite stamps, which depict the rich biodiversity that exists in both our countries, and symbolise the friendly and collaborative nature of our bilateral relationship. You will notice if you look closely, the mangrove tree and the beautiful coral reefs (on the stamps). The beautiful coral reefs represent the beauty and the fragility of nature, especially with rising sea levels, and global warming. The mangrove tree represents the resilience of nature. I think these two represent the preciousness, beauty and resilience of our two countries, and of our bilateral relations,” the Singapore Foreign Minister said.

He also noted that over the years, the small but very vibrant Sri Lankan community in Singapore has made significant contributions to the development of Singapore.

“Our very own first Foreign Minister Mr S Rajaratnam was himself of Sri Lankan heritage. Today, Sri Lanka’s influence can be found all around Singapore, including in our architecture, our street names, culture, and in our social fabric itself,” the Foreign Minister said.

The milestone event today was held with the participation of Foreign Minister Dinesh Gunawardena.

The two stamps ceremonially unveiled at the event, were especially designed for the occasion to depict the theme “Marine Conservation”, and showcase the restoration of Coral Ecosystem in Sri Lanka, and Mangroves in Singapore and reflects the shared interest and commitment of both countries in protecting the marine environment.

He recalled his meeting with Minister Balakrishnan when both were holding different portfolios and the discussions held on tackling challenges posed by climate change across the globe.

Minister Gunawardena said further that the unveiling of commemorative postage stamps to mark the 50th anniversary of diplomatic ties, undoubtedly shows the great warmth and friendship that exist between the two countries. (Colombo Gazette)