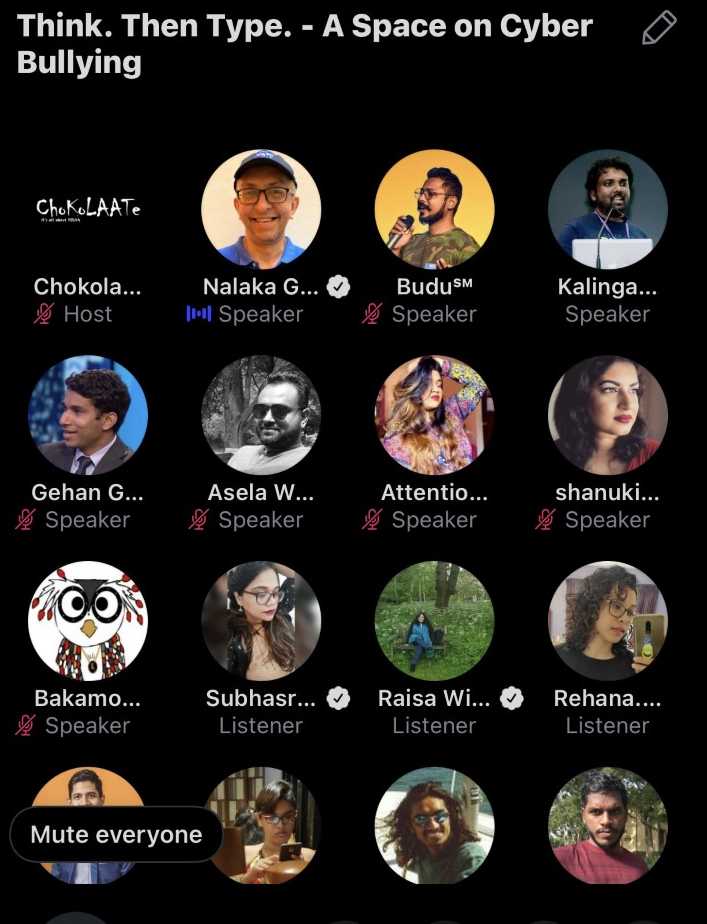 ‘Think. Then Type.’ was a Twitter Space held on the 22nd of July to tackle and discuss the spread of Cyberbullying, especially in the Sri Lankan cyberspace.

The panel of speakers included some of the best of the best when it came to knowledge on cyberspace and cyber security as well as how to deal with cyber bullying in the legal aspect. As Asela Waidyalankara said,“Schools need to focus more on Cyberbullying and how to deal with Cyberbullying, the audience is getting younger and younger and these skills need to be taught”

The panel was also said to be a ‘diverse and talented panel’ which was perfect for this type of discussion.

During the COVID-19 Pandemic the world saw an increase in the usage of digital media and social media.While texting, digital messaging and using social media are central ways in which teens and adults build and maintain relationships, this level of connectivity may lead to potentially troubling and nonconsensual exchanges.

The most common type of harassment everyone encounters online is name-calling. But Cyberbullying covers a vast subject that includes blackmail, exclusion, doxing, trickery, masquerading, cyber stalking, fraping, trolling and flaming.

At ChoKoLAATe Magazine, they work on battling cyber bullying as they believe the internet should be safe to use for everyone, which is why they’ve initiated a series of Twitter Spaces that will discuss various topics such as Cyber Bullying, Sexual Harassment and other pressing topics via their Twitter account – @ChokolaateM

Follow them on their socials to stay updated on new webinars and spaces.