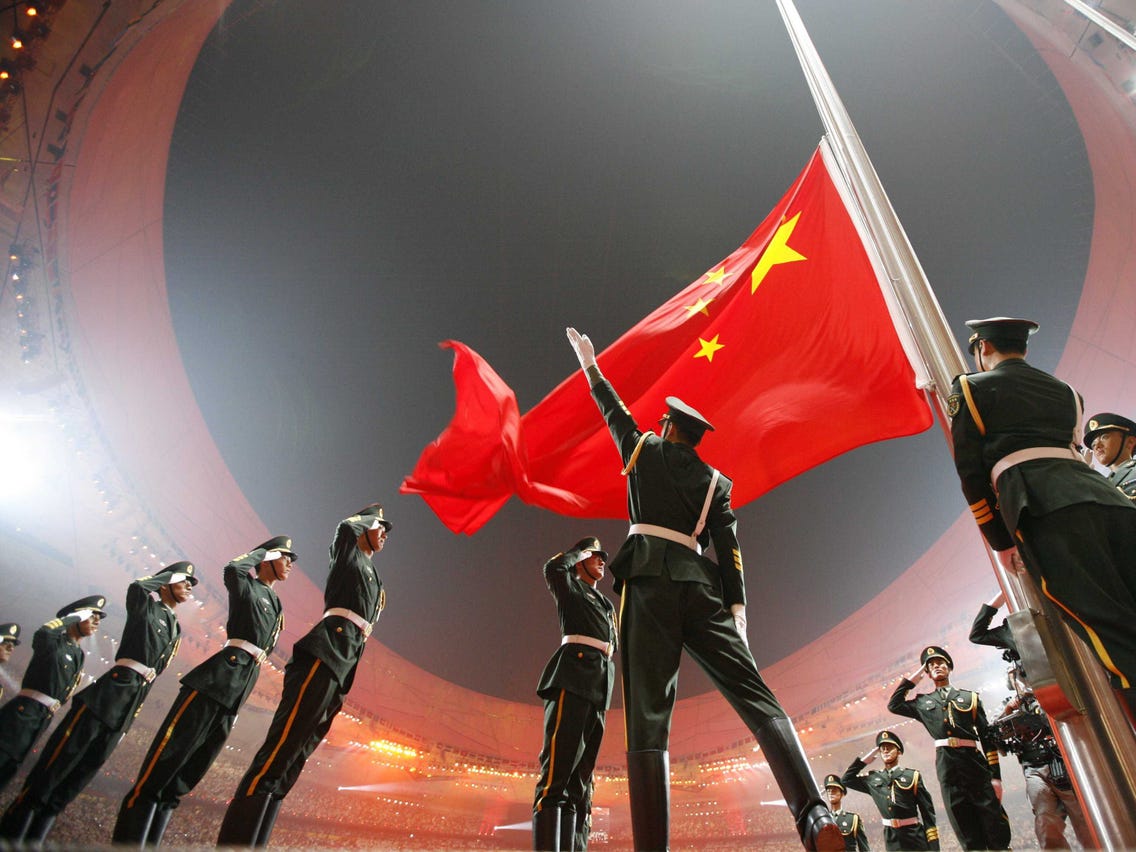 A decade ago, British scholar and journalist Martin Jacques wrote a book with the provocative title “When China Rules the World”.

Jacques says China’s economic transformation will provide the platform for political, military and cultural influence that would rival and surpass that of the US and provide an alternative path to modernity as well as a very different world order.

But the question is, can the Communist Party-led China be ever as formidable and compete a superpower as the US has been for the last eight decades? When the Soviet Union competed with the US to claim superpower status during the Cold War period, it somewhat matched America’s strength in leading alliances and military power. However, at the height of its power, the Soviet Union was never a match for US domination economically or culturally. Like the Soviet Union in the past, China now faces several geopolitical and cultural challenges before it can reach global superpower status similar to that of US. China can’t aspire to get the same respect and acceptance worldwide, even if its economic and military power overtakes the US. A democratic US will always have ideological, political, and cultural superiority compared to a Communist China.

Although China has developed a hybrid system to grow spectacularly on the economic front, it is still a one-party Communist country. Politically, it has become further closed and centralized than ever before. The Chinese Communist Party celebrated its 100th anniversary this year. In 2011, when it was celebrating its 90th anniversary, many top Chinese political scientists openly discussed the possibilities of China opening up to a multi-party electoral system. That sort of discussion is almost impossible to imagine in Xi Jinping-led China now.

China is a strong state with a powerful party bureaucracy, but its politics is potentially very fragile. Under a closed system, it is almost impossible to predict when that spark will arrive to ignite a political upheaval. Though China has been enjoying political stability for long, the Chinese people don’t have similar trust and confidence in their political system as the Americans have in theirs. This will not help China command the respect of other countries in its competition to become the global super power. This is a country where the Interpole chief or a globally prominent billionaires can disappear without any official explanation. Hundreds of Chinese millionaires have been living abroad to protect their wealth from future uncertainties and to avail the opportunities of open societies.

In the arena of demography, the demographic decline has eliminated the once seemingly inexhaustible supply of cheap labour that stimulated China’s growth after 1980. By 2012, this demographic dividend had reversed with fertility rates in free fall due to the one child policy. As a result, China has aged more rapidly than any other country and more than three times the rate of Germany, Russia and Italy in the past century.

By 2020, it was expected that there will be nearly 170 million Chinese over the age of 65, a majority of whom don’t have pensions, underlining the fact that China is still a developing country despite all its impressive advances. Whether China grows old before it gets rich depends on one’s definition of rich. But as their people’s aspirations grow, Chinese leaders will have to divert more of the ­national budget towards aged care, putting added pressure on revenue just as the labour pool shrinks, a problem with which developed world is only too familiar. China has the highest take-up of industrial robots in the world so robots may be able to fill some of the labour gap and stimulate productivity. But you wouldn’t want to bet your house on it.

Another area of concern is China’s political stability. The Communist regime maintains firm control despite the huge challenges of running such a large and complex country. However, the main occupation of the regime is to stay in power. China perceives issues such as human rights and efforts to encourage democracy as an attempt to contain and an interference with internal affairs. The Chinese perspective is best described by the following: In history, Chinese leaders have believed in force. Force worked in Tiananmen. It intimidated the intellectuals, and that paved the way for economic growth and political stability. It is realpolitik. And in the Chinese value system, sovereignty, national unification, and preserving the regime have always been higher than peace.

According to Human Rights Watch Report (2021), the Chinese government’s authoritarianism was on full display in 2020 as it grappled with the deadly coronavirus outbreak first reported in Wuhan province. Authorities initially covered up news about the virus, then adopted harsh quarantine measures in Wuhan and other parts of China. The government has rejected international calls for independent, unfettered investigations into Chinese authorities’ handling of the outbreak, and at the UN Security Council and Human Rights Council, the Chinese government routinely opposes initiatives to defend human rights in other countries, for fear that the precedent might come back to haunt it.

In Xinjiang, Turkic Muslims continue to be arbitrarily detained on the basis of their identity, while others are subjected to forced labor, mass surveillance, and political indoctrination. In Inner Mongolia, protests broke out in September 2020 when education authorities decided to replace Mongolian with Mandarin Chinese in a number of classes in the region’s schools. Chinese authorities’ silencing of human rights defenders, journalists, and activists, and restrictions on the internet, also make it difficult to obtain accurate information about Chinese government policies and actions. Civil society groups, and United Nations officials expressed growing concern over the Chinese government’s human rights violations in 2020. In April, reports of Africans in China being targeted for Covid-19 testing led to complaints by African governments and civil society.

It is clear that China’s economic and military transformation has been aimed at challenging the balance of power that has existed in the region since World War II. China has demonstrated hegemonic intentions through its territorial claims in the South China Sea and in its recent actions against Taiwan. A more aggressive and expansionist policy may occur as China faces more pressure to provide food and resources for one quarter of the world’s population. If the current transformation continues, China will have, in the future, the economic and military might to threaten both the countries in the region and the West.

A communist government, that has demonstrated that it is unhappy with its status in the world, also rules China. While Western governments have devoted a great deal of time and thought on how to treat China, their policies have not had any effect on the current regime’s respect for human rights or democracy. Any movement by the West to promote human rights and democracy in China represents a direct threat to the existing regime. The brutality of the Tiananmen massacre should serve as a warning of the importance the CCP places on maintaining power. China more and more sees itself as a counter to Western values and way of life. In its effort to emerge as a great power, China has changed its security strategy from defensive to offensive. If China wants to be a dominant world power, and chooses to act based on the example of the former Soviet Union, it will have the potential to seriously undermine her current economic and political order.

The strong economic attraction to China needs to be balanced by policies that will stand the strains that closer cooperation will place on it. The combination of a large and prosperous economy, a modernized and advanced military and a Communist regime determined to stay in power has the potential to offer considerable security challenges to the world early in the 21st century. Another area of concern is related to the resources that will be required to ensure China’s continued existence. China has twenty-two percent of the world’s population, but only seven percent of the cultivatable land. The average cultivated land per capita is only one third of the world average and continues to shrink. Construction reduces cultivated land by seven million hectares every year. While China is now an exporter of oil, its rapid industrialization could see it becoming an oil importer in the near future. The ability of the Chinese government to manage this situation will play a key role in further territorial claims and the stability of the Communist regime.

Geopolitics also does not favour China as it has the US. China is surrounded by several powerful and competing countries. Among them, at least two, Russia and India, demonstrating the dream of becoming superpowers. China has also fought wars against them and continues to have several border disputes. China is neither safe nor secure in its neighborhood to freely engage in political and military projects in other parts of the world as the US does. Besides China’s location in a tough neighborhood, it also lacks trusted, powerful allies. China is especially vulnerable to external shocks because of the rapidity of its expansion and mounting challenges on its periphery from a ­nuclear-armed North Korea, pro-independence sentiment in Taiwan and Hong Kong and the hedging activities of anxious neighbours who worry about their potential loss of freedom and autonomy in a China-dominated Asia. On the one hand, the democratic US has established strong political and military cooperation with many regionally powerful countries like the UK, Germany, Japan, and Australia from the Cold War days while getting new ones like India. On the other hand, China’s only significant ally in the world is Russia, but that alliance suffers from many contradictions and has not passed the test of time. It will be hard to imagine China gaining the upper hand militarily, economically, and politically in the future, vis-à-vis the US and its allies’ combined forces.

China has become rich, it is spending heavily on its university education, but around 600,000 Chinese students  go abroad for their higher studies every year. China’s economy might be booming for decades, but 10 million Chinese have reportedly travelled to other countries to find jobs while 51 million people from all over the world have moved to the US for better work and improved living. The ideal solution is an open and transparent China, which is both peaceful and stable. Unfortunately, the secrecy of the regime, and the problems described above, do not provide a promising outlook. Policies of the democratic world have not had any effect on the current regime’s respect for human rights or democracy. If China wants to be a dominant world power, and chooses to act based on the belligerence based on local experience, it will have the potential to seriously undermine the current world order and liable to seek antagonism and antipathy from the Free World. In other words, the view that unless China changes its systems, it has no chance of being a superpower may be correct.