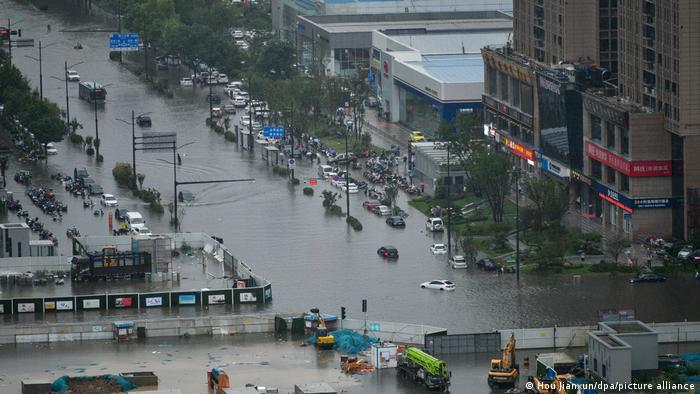 Torrential rain has caused severe flooding in parts of central China, forcing people from their homes and leaving stations and roads submerged.

More than 10,000 people in Henan province have been evacuated to shelters following the record rainfall.

At least 12 people have died in the city of Zhengzhou since the flooding began, authorities there confirmed.

More than a dozen cities have been affected with main roads forced to close and flights cancelled.

Henan province, which is home to some 94 million people, has issued its highest level of weather warning following an unusually active rainy season.

There are also fears that a dam in Henan province could collapse after it was damaged by the recent storms.

A 20-metre (65ft) breach has emerged in the dam in Luoyang city, officials said. Soldiers have been deployed to the area and a statement from the army warned it could “collapse at any time”.

Rescuers were seen pulling people to safety using rope, while others stood on train seats to try to keep above the water.

It is not yet known how many people – if any – remain trapped, but hundreds are reported to have been rescued so far.

One person who went by the name Xiaopei wrote a post on social media site Weibo begging for help.

“The water in the carriage has reached my chest. I can’t speak anymore,” they said. The fire department later confirmed Xiaopei had been rescued.

“I have lived in Zhengzhou all my life and have never seen such a heavy rainstorm as today,” Wang Guirong, a 56-year-old restaurant manager, told the Associated Press.

The amount of rain over the last three days in Zhengzhou is reported to be the same as what it would usually receive in an entire year.

The downpours are forecasted to continue in the region for at least the next 24 hours.