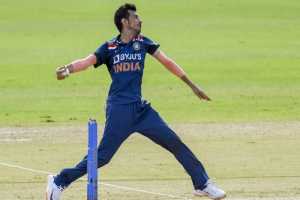 India spinner Yuzvendra Chahal is slowly and steadily gaining ground in international cricket. He had taken a couple of wickets against Sri Lanka in 1st ODI; now he stands on the cusp of an interesting record. He can be the fastest Indian bowler to reach 100 international wickets.

He has 94 so far in 55 matches. If he takes a six-for, then he will be the joint-fastest with Mohammed Shami who had achieved the same feat in 56 matches. If not, then he can beat Jasprit Bumrah who got to ‘Club 100’ in 57 games; his close friend Kuldeep Yadav reached the milestone in 58 matches for India.

Chahal has two five-wicket hauls in his career. His 6/42 against Australia back in January 2019 had class written all over it. Meanwhile he has picked up a six for in a t20 game as well where he bowled just four overs.  In the last game, Chahal accounted for a dangerous looking Avishka Fernando. Later he also dismissed opposition captain Dasun Shanaka as the hosts were restricted to 262/9 in their allotted overs.

‘Not Worried With What Anyone Says, Here to Enjoy Cricket’

Kuldeep Yadav and Yuzvendra Chahal finally came to the fore as the duo once again hunted in pack at Colombo in the second ODI against Sri Lanka. ‘Kulcha’ accounted for four wickets and made sure that they slow down the hosts. This brought back memories from 2018 tour of South Africa where the duo went after  Protea middle-order; these two were on the money yesterday as India beat Sri Lanka with fourteen overs to spare.

“Very happy that after a long time Chahal and I got to play together for the team. We are comfortable with each other and we back each other. We both share inputs on the field whenever it is required, the bonding is nice between us both. We performed well together, we played after a long time and it orders well for the side,” Kuldeep was quoted as saying by news agency ANI. (News18)