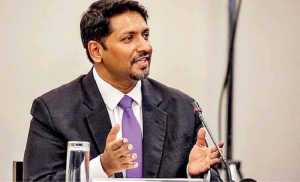 UNP Deputy Leader Ruwan Wijewardena said that most of those in the SJB are former UNP members.

A majority of those in the SJB are our friends and former UNP MPs,” he said.

He said the UNP never closed its doors on those who left the party and those doors still remain open.

Wijewardena was speaking to reporters on Saturday after attending talks initiated by former Speaker Karu Jayasuriya involving a number of opposition political parties.

Opposition Leader Sajith Premadasa and members of the Tamil National Alliance were among those who attended the talks.

The inaugural conference for an All-Party Coalition of the Opposition organized by the National Movement for a Just Society was held at the Janaki Hotel premises in Colombo on Saturday.

Wijewardena said that the discussed steps to be taken to address the issues faced by the public as the government had failed to deliver on its promises. (Colombo Gazette)