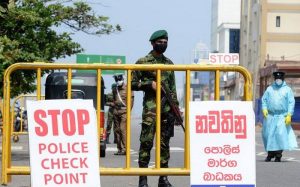 Several roadblocks are to be set up in the Western Province (WP) during the upcoming extended weekend.

Police spokesman senior Deputy Inspector General (DIG) Ajith Rohana said the roadblocks are to be set up as part of special quarantine operations that will be implemented by the Police in view of the long weekend.

DIG Ajith Rohana said special roadblocks will be set up at the entry/ exit points of the Western Province and the entry points of other districts during this period.

He said 3401 people in 2585 vehicles were inspected yesterday at the 14 entry/ exit points of the Western Province.

DIG Ajith Rohana said 293 people in 139 vehicles had been turned away after attempting to violate the inter-province travel ban which is still in effect for the general public.

The public can cross borders only to receive treatment or attend the funerals of close relatives.

The inter-province travel ban has been partially relaxed only for essential services workers, the Police Spokesman said.

The Police Spokesman further said another special operation will be conducted to monitor if people are wearing face masks when stepping outdoors.

DIG Ajith Rohana said 245 people were arrested for failing to wear face masks in the 24-hour period ending at 06 am today.

First jab for people above 60 in Western Province this week