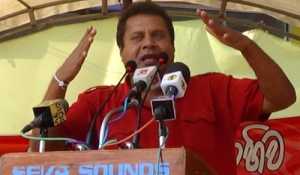 Former Parliamentarian Jayantha Ketagoda has turned down an offer to be appointed as Sri Lanka’s High Commissioner to Australia.

Ketagoda told Daily Mirror that he “respectfully” turned down the offer as well as other positions made available to him.

Ketagoda had recently resigned from his National List seat in Parliament to make way for Basil Rajapaksa to be appointed as a Member of Parliament.

Speaking to Daily Mirror the former MP said that he had received a number of offers from the President, Prime Minister, and new Finance Minister Basil Rajapaksa.

However, he said that he had turned down the offers and will continue his political journey by supporting Basil Rajapaksa.

“The reason I resigned was to make way for Basil Rajapaksa to enter Parliament. I was not expecting anything in return,” Ketagoda claimed.

Ketagoda said that while he was grateful to the many offers made to him for the sacrifice he made, his goal was to do what was right for the country and not for personal gain. (Colombo Gazette)

Ketagoda sworn in as a Member of Parliament