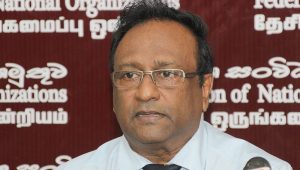 Minister of Public Security Sarath Weerasekera says youth above the age of 18 must be given leadership training in military camps.

Weerasekera said that giving training in a military camp is not an attempt to turn youth into soldiers.

However, he said such training will help ensure discipline in the society

Pointing out that discipline in the country has drastically dropped at present, he said in order to live without suspicion or fear, society must be free of frauds and sexual abusers.

“In the event, a child goes missing, we cannot assure the child’s future based on the current state of the country,” he said.

Minister Weerasekera further said that when a proposal was made in Parliament by him to provide leadership training to youth above the age of 18 at military camps, he was condemned by various parties.

He insisted that military camps in the country are the only institutions well equipped to implement such leadership programmes, as it also teaches discipline.

The Minister of Public Security added that if a proper course is introduced to improve an individual’s personality then it would lead to building a disciplined society.

He made the statement during an event held to declare open the Alubomulla and Hirana Police Stations in Panadura. (Colombo Gazette)