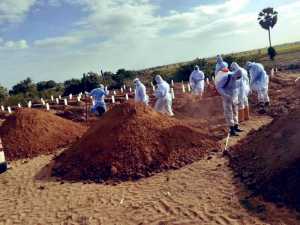 Over 1000 Covid victims have been buried in Oddamavadi.

The Government initially announced that the Health Ministry’s technical committee has approved the Iranaitivu island in the Gulf of Mannar as a burial ground.

However, due to protests by area residents, the island was not used as a burial ground.

Thereafter, in March, the Government approved the burial of Covid victims in the Soodupaththinachenai area in Oddamavadi, Batticaloa, and Irakkamam area in the Ampara District.