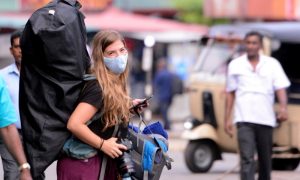 Sri Lanka is looking at the possibility of opening its borders for more foreign tourists, Minister Prasanna Ranatunga said.

The Minister of Tourism told Colombo Gazette that discussions are underway with stakeholders from the tourism industry and various airlines in this regard.

He said the Government intends to reopen Sri Lanka’s borders for large-scale tourism.

Stating that foreign tourists were not prohibited during the travel ban imposed in Sri Lanka, Minister Ranatunga said the process which was operated on a limited scale will now be expanded.

He said the Government intends to vaccinate all stakeholders of the tourism industry prior to reopening the borders.

The Tourism Ministry is looking at running a promotions-based scheme to attract foreign tourists to the country.

Discussions are underway with various airlines to offer buy one get one free packages, while negotiations are ongoing with hotels to provide discounts to high-end foreign travellers, the Minister said.

Minister Prasanna Ranatunga further said discussions are also underway with the embassies in Russia and the Middle East to conduct promotions to attract tourists to Sri Lanka.

Stating that the ministry hopes to conclude discussions and take a final decision by the end of this month, he added that the plans will be immediately implemented as soon as the decisions are finalized. (Colombo Gazette)

Harin assures Sri Lanka is safe for tourists to visit