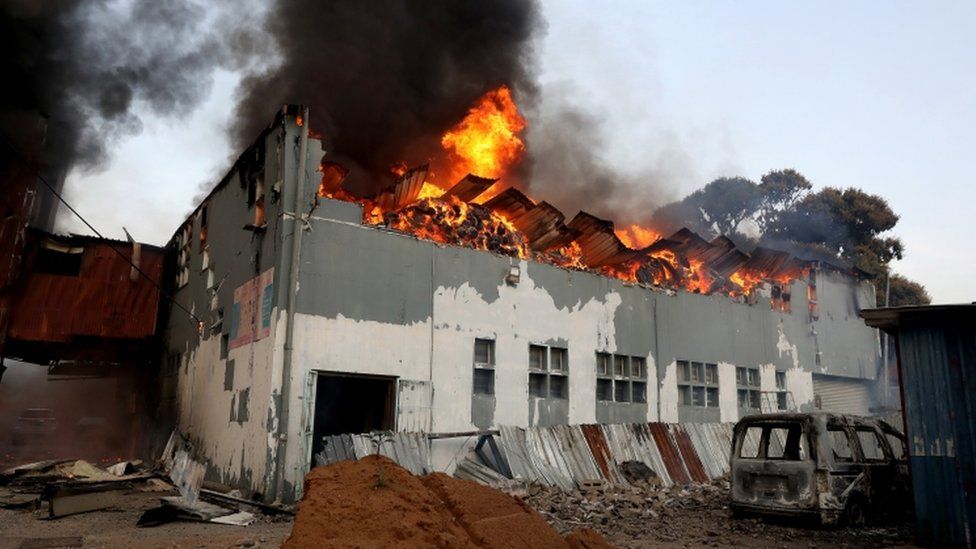 The death toll in South Africa has risen to 72, after violence engulfed parts of the country after the jailing of former President Jacob Zuma.

This includes 10 people killed in a stampede during looting on Monday night at a shopping centre in Soweto.

The BBC filmed a baby being thrown from a building in Durban that was on fire after ground-floor shops were looted.

The military has now been deployed to help the police overstretched since the unrest began last week.

South African police said in a statement that they had identified 12 people suspected of provoking the riots, and that a total of 1,234 people had been arrested.

President Cyril Ramaphosa has called it some of the worst violence witnessed in South Africa since the 1990s, before the end of apartheid, with fires set, highways blocked and businesses and warehouses looted in major cities and small towns in KwaZulu-Natal and Gauteng provinces.

Ministers have warned that if looting continues, there is a risk areas could run out of basic food supplies soon – but have ruled out declaring a state of emergency.

Several shopping centres in Soweto – South Africa’s largest township which was once home to Nelson Mandela – have been completely ransacked, with ATMs broken into, restaurants, stores selling alcohol and clothing shops all left in tatters.

Soldiers working with the police managed to catch a few rioters; in total almost 800 have been arrested, but law enforcement remains heavily outnumbered, he reports.

In KwaZulu-Natal – where livestock has also been stolen – the unrest continues with ambulances coming under attack by rioters in some areas, South Africa’s TimesLive news site reports.

Video footage shows that a blood bank was looted in Durban as Mr Ramaphosa addressed the nation on Monday night. (Courtesy BBC)