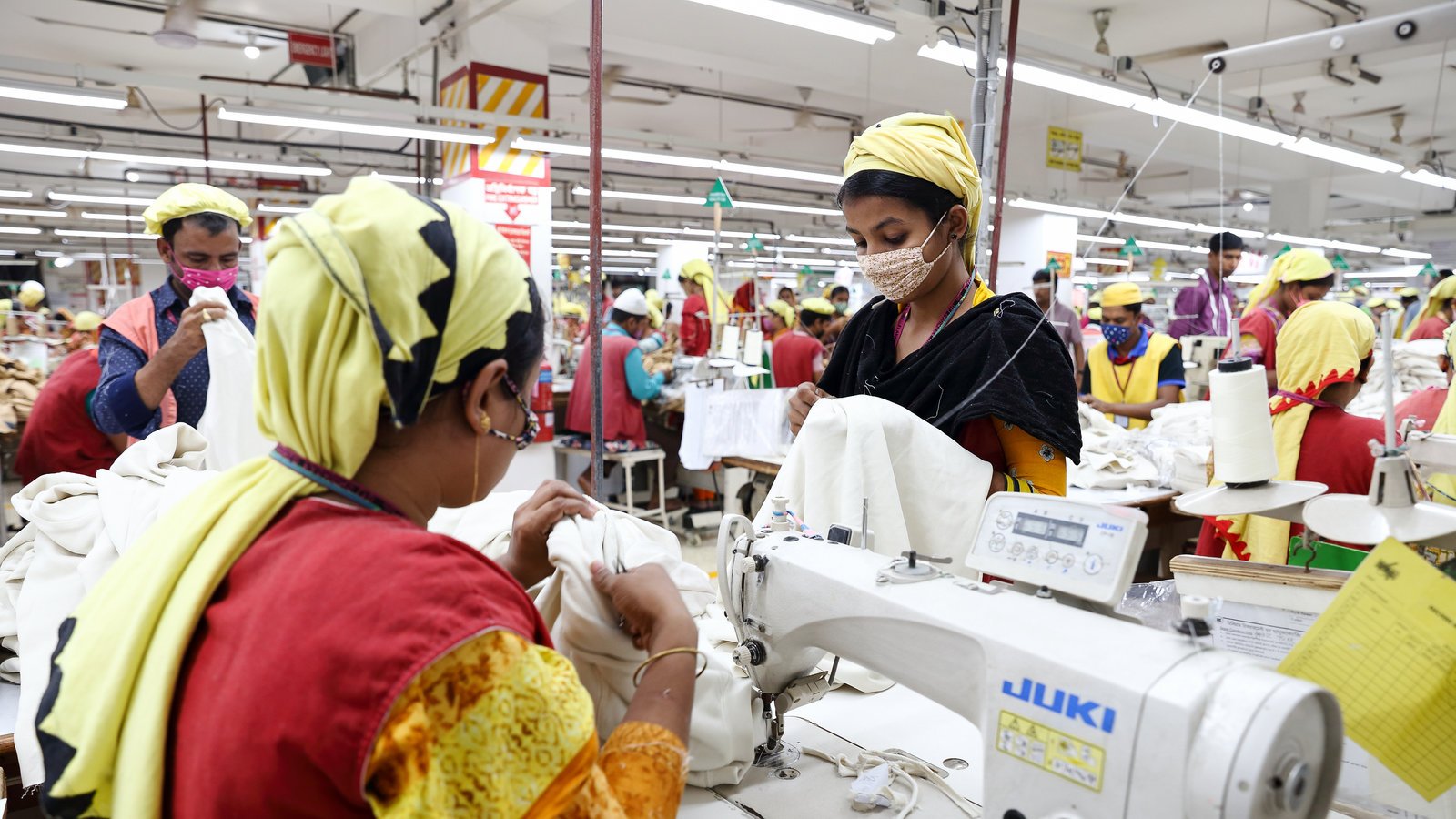 The Sri Lankan Government has used a strict lockdown, first imposed on May 21, 2021, and other measures, including travel bans and bans on public gatherings, to contain a fresh wave of Covid-19 cases. However, President Gotabaya Rajapaksa ordered garment factories to remain open. Trade unions and public health inspectors have reported numerous virus outbreaks in factories, as well as in the congested boarding houses where many workers live, and alleged that employers were under-testing and under-reporting cases to maintain production levels.

“Sri Lanka’s garment workers are entitled to work in safety and be properly paid even when they fall sick or need to quarantine,” said Meenakshi Ganguly, South Asia director at Human Rights Watch. “The government and employers should fully implement existing agreements and guidelines, be transparent about Covid-19 infections in factories, and provide for workers’ welfare instead of intimidating and silencing them.”

One in seven Sri Lankan women work in the garment sector, according to the International Labour Organization (ILO). There have been repeated outbreaks in garment factories since April. Yet, five labor rights activists from four organizations told Human Rights Watch they have received complaints from workers that factory managers pressured workers to work without adequate occupational health and safety measures.

All five said that numerous workers from different factories complained to them that they lost pay when they fell sick or needed to quarantine. The activists said that the police or military personnel had intimidated them to stop them from speaking out.

Following an October 2020 Covid-19 outbreak in a factory owned by Brandix Lanka Limited, the government made it mandatory for all factories to have a Covid-19 health committee, including management and workers’ representatives. As of early July, people interviewed said, most factories had not established the committees.

On October 25, the Sri Lankan government issued guidelines requiring garment factories to take occupational health and safety measures for ventilation, screening, testing, and isolating infected workers. Labor rights activists have consistently raised concerns in written statements that employers were flouting guidelines, despite government claims that health measures are enforced. “Labor rights are reserved to a piece of paper,” one activist said, adding that workers, “are scared of losing their jobs, so even when they have symptoms they continue to go to work.”

Another labor activist said, “If factories are aware of a positive test, they don’t do anything about it or share the information” with health authorities. An activist who had assisted workers who were sick with the virus said, “The employers are busy with their orders and workers are not given PCR [Covid-19] tests, because if they are positive, they will not be able to employ them in production.”

Many, though not all, garment factories in Sri Lanka are located within industrial areas called Free Trade Zones (FTZs). Systematic data on Covid-19 cases in the garment sector, which contributes 6 percent of Sri Lanka’s GDP and 44 percent of exports, is not available.

On May 20, a court in Galle detained a manager from the Koggala FTZ on charges under the Quarantine and Prevention of Diseases Act, after the manager allegedly concealed information and failed to follow instructions from public health officials following an outbreak in the factory. Although this prosecution was unusual, activists told Human Rights Watch they believed factory violations of quarantine rules are widespread.

In April, police dispersed a workers’ protest outside a factory in Bingiriya, where the management was alleged to have kept staff working despite an outbreak. On July 8, trade unionists were detained at a labor rights protest in Colombo and forcibly taken to a Covid-19 quarantine facility, two days after the government banned public protests on purported public health grounds.

Quarantine facilities are run by the Sri Lankan military, which the government has placed in control of its response to the pandemic. When employees are sent to quarantine facilities, their absence is typically deducted from their annual allowance of 14 days unpaid leave.

Following the major outbreak at a Brandix factory in October, trade unions filed a complaint with the Human Rights Commission of Sri Lanka alleging that soldiers “rounded up” 98 workers in the middle of the night and arbitrarily detained them in an unsanitary quarantine facility. In response, the army accused the complainants of pursuing “hidden plans,” and said the military should not be “insulted or downgraded.” Human Rights Watch wrote to Brandix seeking information about the October outbreak but received no response.

Many factories have hired former army officers in management roles, and their tendency to enforce military-style discipline has “instilled fear” in workers, activists said. One activist said that she was threatened earlier this year by a garment factory manager, a retired army officer, who called her and told her he had “dealt with terrorists” and warned against “raising issues.”

The labor rights activists also reported increased surveillance and intimidation by government security agencies. One woman said military intelligence asked her organization why it had spoken to the international media. Another activist said that members of the police Criminal Investigation Department visited her office in April.

“It’s very risky for anyone to talk about these things,” one activist said. “People are very afraid to speak out,” said another.

The government has also taken formal steps to prevent the sharing of information related to the pandemic. In May, the health secretary, Maj. Gen. Dr. S H Munasing, issued a circular banning health officials from speaking to the media, because they were allegedly sharing “incorrect” information and “criticizing health policies.”

In June, the police issued a statement entitled “circulation of fake news, photographs, videos causing disunity, hate and obstructing the Covid-19 programme.” The Bar Association of Sri Lanka said the powers cited “could be misused by police officers in order to stifle the freedom of speech and expression.”

Security force intimidation of workers is particularly acute in the Tamil-majority north of Sri Lanka, which has remained heavily militarized since the end of the civil war in 2009. In Maruthankerny, security officials reportedly told workers they would lose pay and benefits if they did not report for work, despite safety fears related to the spread of Covid-19.

Most garment workers in FTZs live in crowded boarding houses operated by private landlords. Workers’ representatives said that because people with suspected or confirmed cases of Covid-19 are frequently not placed in isolation but instead sent back to their boarding house, there is a risk of transmitting the virus among workers of different factories who live in the same building.

Many garment workers come from parts of the country different from where their factory is located, so they do not qualify for the Rupees 5000 (US$25) relief packages distributed by local governments to low-income workers whose incomes have been affected by the pandemic.

The government and factory owners should take effective steps to isolate workers who test positive, and ensure that those receiving treatment or in isolation or quarantine receive full pay, Human Rights Watch said. Relief packages should be distributed to workers irrespective of which part of the country they come from, and safety measures and guidelines previously agreed upon with worker representatives should be followed.

Attempts to intimidate or coerce workers and their representatives, attacks on freedom of association, including the right to join a trade union, and attempts to stifle freedom of expression, should be immediately withdrawn. Foreign companies that buy clothes from Sri Lanka, and trading partners, including the European Union, whose GSP+ trading arrangement includes commitments to uphold labor rights, should press Sri Lanka to adhere to its commitments.

Sri Lankan garment manufactures have applied for loans from the International Finance Corporation (IFC), a part of the World Bank Group. The IFC should rigorously ensure that companies receiving loans adhere to its performance standards on labor and working conditions, and uphold fundamental labor rights enshrined in ILO conventions, including freedom of association and collective bargaining.

“Sri Lankan garment workers don’t just provide for their families, they help to keep the entire economy afloat during these very difficult times,” Ganguly said. “Their safety needs to be protected and their rights respected by the global garment industry that relies on their labor.”