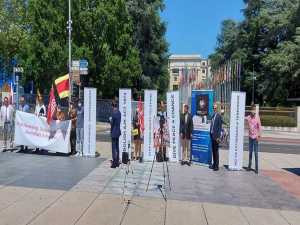 Geneva (Switzerland), July 5 (ANI): Exiled Kashmiris and rights activists held a demonstration in front of the UN Human Rights Council building in Geneva to highlight Pakistan’s systematic discrimination against Kashmiris in the region it has illegally occupied for over seven decades.

They sought immediate UN intervention into Pakistan’s human rights violations, state-backed enforced disappearances of ethnic minorities, and the brazen misuse of draconian laws against the judiciary, social activism and journalism to muzzle the dissent.

A number of people have been held on framed-up charges and many others have been sentenced to prison for not falling in line with Islamabad’s narratives and versions of reality, the Kashmiris and rights activists said.

Sardar Shaukat Ali Kashmiri, exiled chairman of United Kashmir People’s National Party (UKPNP) said: “Today’s demonstration was held to express solidarity with the independent judges, the lawyers and the journalists who are constantly under attack by Pakistan.

While many of them have been forced out of their native places by the establishment, the others have been beaten at their homes for supporting different opinions.”

“Some have even been killed. And it (demonstration) was not just to express solidarity but also to urge the United Nations Human Rights Council to urge that it should intervene and pressurize Pakistan to change the undemocratic means to suppress the civil society,” he added.

The political activists also held a conference to deliberate upon rising attacks on the judges, lawyers and journalists.

They said that Pakistan was using every trick in the book to stop the dissemination of truth and information. Torture and killings are never reported as ISI monitors and censors the flow of information.

The local leaders had no authority in a real sense,” they said.

While they are elected through a democratic exercise, they hardly have any authority to legislate. Everything happens at the instructions of Islamabad and the deep state of the army.

Kashmiri said: “This behaviour is totally unacceptable in the 21st century. We believe that people should have all rights over their resources. People should have the right to choose their leaders and the leaders they are choosing should have enough authority to work for the peace and development of both their people and the region. And I believe that the entire region is suffering due to the undemocratic posture they have resorted to over the past decades.”

Pakistan occupied Kashmir’s resources have been plundered over the years by Pakistan. Its culture has been violated and socio-economic standards have plunged deep towards the bottom.

Although, Pakistan’s successive Prime Ministers including Imran Khan have made the tall claims of working for the welfare of Kashmiris the reality speaks of its brute atrocities carried out with impunity since 1947.

And this is despite the state acceding to India in 1947 after British India was divided into India and Pakistan. (ANI)