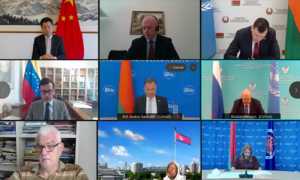 Sri Lanka joined China to slam Western countries accusing them of hypocrisy on human rights and for using it as a geopolitical tool to attack countries they don’t like.

Diplomats, scholars and representatives from NGOs attended an online event on the sidelines of the 47th session of the United Nations Human Rights Council on Friday, Global Times reported.

Themed as “Human Rights in the West: Lack of international monitoring and response to the human rights violations,” the online meeting was jointly held by China, Belarus, Russia and Venezuela with more than 40 representatives from other countries, officials from the Office of the High Commissioner for Human Rights, as well as representatives of NGOs and media joining the event.

Focusing on the interests of its own people, every country should combine universal principles of human rights with the reality in their countries to develop a system that suits them well, Jiang Duan, minister of the Chinese mission to the UN in Geneva, said at the sideline meeting.

All countries should communicate and cooperate on human rights and should not use it as an excuse to pressure or even impose unilateral coercive measures against others, Jiang said.

The minister noted that some Western countries have serious violations of human rights. They have committed crimes against indigenous people and killed innocent civilians in other countries through military interventions.

Instead of repenting and correcting their crimes, those countries lie for political purposes to blatantly interfere in other countries’ internal affairs, Jiang said, noting that the behaviors have severely violated the UN Charter and principles and greatly damaged human rights in other countries.

Ambassadors and diplomats from many countries, including Belarus, Russia, Venezuela, Iran, North Korea, Sri Lanka also delivered speeches, unveiling the severe human rights violations in Western countries especially against immigrants, indigenous people and other minorities. They noted that the multilateral human rights organizations have long been controlled by Western counties and have turned a blind eye on these problems.

Some diplomats said that some Western countries sell themselves as “developed” and “democratic” and are eager to lecture others on human rights issues and criticize countries they don’t like.

These countries treat “human rights” as their “privilege” and think human rights can only be determined by their Western values. This only succeeds in unveiling the colonial mentality, violating the Universal Declaration of Human Rights and will bring disastrous results to the international human rights cause.

Representatives from NGOs and scholars from China, Belarus and Italy also expressed their concerns on race discrimination, police violence, slaughter of indigenous people, and severe human rights violations on immigrants. They pointed out that the democratic system boasted by many Western countries is a system for the elites only, and the governments do not care about the common people’s rights. Developing countries should be careful before deciding to copy the Western system. (Colombo Gazette)