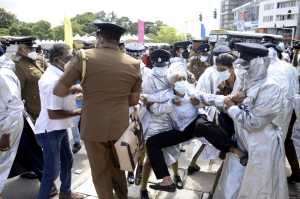 The General Secretary of the Ceylon Teachers’ Union (CTU) Joseph Stalin and several others were arrested for staging a demonstration in Battaramulla, in violation of  the quarantine laws, and were sent to a quarantine facility after being released on bail yesterday.

Stalin and the others who were to be taken to a quarantine facility refused to go resulting in a tense situation outside the court premises in Colombo.

However, they were subsequently taken to be quarantined for 14 days.

Stalin led a protest against the Government on Parliament road yesterday resulting in the Police arresting 30 of the protesters.

They were produced in court and released on bail and were taken to be quarantined.

Protests have been banned in Sri Lanka by the Ministry of Health as a result of the coronavirus. (Colombo Gazette)