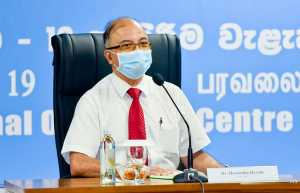 AstraZeneca vaccines are expected to arrive in Sri Lanka on 19th July, the Health Ministry said.

Deputy Director General of Public Health Services Dr. Hemantha Herath said that if the vaccines arrive on schedule then the inoculation of the second dose using the AstraZeneca vaccines will commence on 20th July or 21st July.

Sri Lanka began mixing Covid vaccines by administering Pfizer as the second jab on those who got the Covishield AstraZeneca vaccine as the first dose.

The Pfizer vaccine was administered as the second dose on a select group of people in Colombo this week.

The vaccine was administered on Colombo residents between the ages of 55 to 69, who obtained the AstraZeneca vaccine as the first dose.