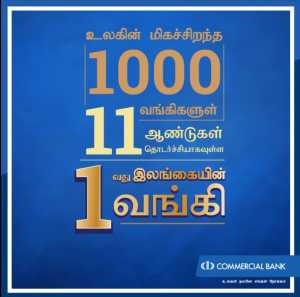 The Commercial Bank of Ceylon has once again been named among the global giants in banking, becoming the only Sri Lankan bank to be ranked in the ‘Top 1000 World Banks’ announced annually by ‘The Banker’ magazine of the UK, for the 11th consecutive year in 2021.

The headwinds of the global COVID-19 pandemic notwithstanding, the country’s benchmark private bank said it has reaffirmed its consistency by becoming the Sri Lankan bank to remain for the longest period on this authoritative global ranking published for the 51st year, demonstrating its indomitable spirit and inherent financial strength.

The Banker, published by the Financial Times of the UK, ranks banks primarily on the basis of their Tier I capital.

“This is truly an affirmation befitting the financial strength and professionalism of the Bank, as well as the sacrifices made in its response to the COVID-19 pandemic,” Commercial Bank Managing Director Mr S. Renganathan observed. “Becoming the first Sri Lankan bank to enter the Top 1000 World Banks ranking was a milestone achievement in itself, but to remain in this ranking for 11 consecutive years despite local and global challenges is a remarkable feat in consistency even in the global context. This is a tribute to the tireless work of the entire Commercial Bank team and provides further motivation to keep serving all stakeholders to the best of our ability.”

Commenting on the 2021 rankings, The Banker noted that “The Covid-19 pandemic has impeded even the most resilient of economies over the past year, with the global economy shrinking by 3.5% in 2020 and world trade volume contracting by 8.6%, according to the World Bank. Banks have faced other headwinds during this period, including persistently low interest rates in most countries, as well as surging competition from fintech and big tech alike.”

“How well has the global banking industry navigated its way through such unprecedented times? Where are their strengths and weaknesses? Is their profitability up or down? Have they seen an uptick in defaulting loans? Which bank has stronger fundamentals compared to its peers? This is what The Banker’s Top 1000 World Banks ranking is able to identify, based on more than 120 data points tracked in The Banker Database year on year. We analyse results by region, country and benchmark bank to bank, as well as run our best-performing bank methodology to pinpoint the leaders that stand heads above the rest,” the magazine said.

The Banker ranks banks from 1 to 1,000, primarily on tier-one capital, and the regional breakdown is supported with editorial commentary, making the Top 1000 World Banks one of the most industry-recognised rankings available. The model refers to 30 key ratios to score and rank banks, country by country, on their performance in eight categories: Growth, Operational efficiency, Return on risk, Soundness, Profitability, Asset quality, Liquidity and Leverage. Each bank’s performance across these categories is then used to generate an overall ‘best-performing bank’ score and ranking.

Compiled from a database of over 5,000 of the world’s biggest banks and acknowledged by the global financial community as the definitive guide to bank rankings and analysis, The Top 1000 World Banks ranking was begun in 1970, and provides in-depth global banking data and analysis for banks, consultants, regulators, vendors, corporates and investors.

Sri Lanka’s first wholly carbon neutral bank, Commercial Bank is the largest private sector commercial bank, and the third largest bank overall in in the country in terms of total assets. It is the only private sector bank that has been designated by the Central Bank of Sri Lanka as a higher-tier Domestic Systemically Important Bank (D-SIB). Commercial Bank operates a network of 268 branches and 932 automated machines in Sri Lanka. The Bank’s overseas operations encompass Bangladesh, where the Bank operates 19 outlets; Myanmar, where it has a Microfinance company in Nay Pyi Taw; and the Maldives, where the Bank has a fully-fledged Tier I Bank with a majority stake.