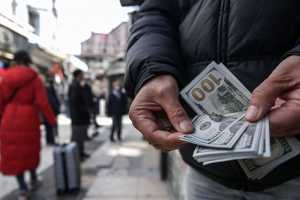 China’s post-coronavirus export boom has created massive headaches for its commercial banks over how to effectively recycle the huge influx of foreign currencies resulting from overseas sales, and in turn how to generate investment returns, analysts said.

China is also seeing rising capital inflows from other channels, such as foreign direct investment into China’s growing economy, as well as portfolio investment into mainland stocks and bonds.

This demand for Chinese assets, in turn, continues to place upwards pressure on the yuan exchange rate, which Beijing is trying to avoid.

Due to the increasing amount of overseas income received by Chinese exporters, China’s foreign exchange deposits hit a historic high of US$1.01 trillion at end of May, up 35.7 per cent from a year earlier, after having surpassed US$1 trillion for the first time in April, according to data from the People’s Bank of China (PBOC).

“We have a lot of dollars sitting on commercial banks’ balance sheets,” said Tommy Xie, head of Greater China research and strategy at OCBC Bank. “This can create a lot of challenges as to how they can make money from that increasing liability.”

Reflecting the limited channels to use foreign currencies in the domestic market, US dollar deposit rates in China have fallen to near all-time lows – levels that are only around a third of the equivalent funding costs in the US itself.

The PBOC is wary that buying US dollar inflows from exporters could result in an accumulation of the currency in its foreign exchange reserves which could draw attention from the US Treasury’s currency manipulation watchdog, said Taimur Baig, chief economist at DBS Bank.

As the US continues to warn countries against intervention in the foreign exchange market, China’s reserves have been stable in a range of between US$3 trillion to US$3.2 trillion since 2017.

And neither Chinese individuals or companies are keen to increase their foreign assets, especially since there is still no road map for how China will ease its travel restrictions to allow Chinese executives to travel abroad, said Gary Ng, Asia-Pacific economist at Natixis Bank.

So it is surprising that Chinese banks are bringing the ever increasing amount of foreign currencies to the offshore market and expanding their exposure to foreign assets, said Larry Hu, economist at Macquarie Capital.

It is unclear if they are holding on to low yielding and depreciating foreign asset, without commercial demand for them, or merely creating outflows to contain yuan appreciation  on behalf of the PBOC,” said Nathan Chow, an economist at DBS Bank.

“It is unclear if Chinese banks are holding more US dollars in preparation of overseas business expansion,” he said.

China has, in the past, had a poor track record of income returns on investments abroad. In 2017-18 when the yuan was appreciating, the private sector tended to cut, not increase, their exposure to foreign assets.

But it turns out Chinese banks are now shifting their US dollar holdings to the offshore market, creating massive outflows recorded under “other investments” of China’s financial account.

At US$115 billion, this includes overseas deposits by Chinese firms and banks, overseas lending by Chinese banks and receivables driven by strong exports, according to first quarter balance of payments data from the State Administration of Foreign Exchange, the government’s foreign exchange regulator.

This situation is especially worrying for Beijing. The strength of the yuan, which rose to a three-year high in June, could potentially invite speculative risky behaviour based on an outlook for further yuan appreciation.

Investors rushing to convert their foreign currency holdings into the yuan could lead to a self-strengthening cycle between foreign currency conversion and yuan appreciation, analysts said.

The PBOC already took a modest step to reduce US dollar liquidity in the onshore market, raising the required reserve ratio in foreign currency deposits to 7 per cent from 5 per cent – a move that will be effective from June 15.

Chinese banks increased significantly their liabilities to other banks by taking in interbank deposits and loans last year as offshore deposits received from Chinese exporters surged, said Gene Ma, head of China research at the Institute of International Finance.

It is unclear if Chinese banks are holding more US dollars in preparation of overseas business expansion.

Overseas lending through Chinese banks to projects under the Belt and Road Initiative has actually been decelerating rapidly, partly because of credit concerns and partly due to a decline in financing of coal-fired power plants as the industry gradually shifts away from fossil fuels into renewable energy, said Alicia Garcia-Herrero, chief economist for Asia Pacific at Natixis.

There have been speculation that private sector financial institutions have been carrying out shadow intervention to suppress the yuan’s appreciation on behalf of the PBOC, although there is not enough proof for the assertion at this stage, Hu said.

“But if the yuan continues to strengthen, it will become harder and harder for banks and exporters to hoard more dollars, given the potential loss from currency mismatch and negative carry,” Hu explained, meaning that banks could struggle with low yielding and depreciating foreign assets as the yuan continues to appreciate. (Courtesy South China Morning Post)