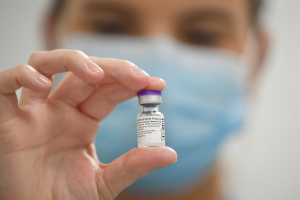 Sri Lanka today began mixing Covid vaccines by administering Pfizer as the second jab on those who got the Covishield AstraZeneca vaccine as the first dose.

The Pfizer vaccine was administered today as the second dose on a select group of people in Colombo.

President Gotabaya Rajapaksa had earlier directed the Ministry of Health (MOH) to issue 25,000 doses of the Pfizer vaccine to the City of Colombo to be used as the second jab on those who obtained the AstraZeneca vaccine.

Colombo Mayor Rosy Senanayake said the vaccine is being administered on Colombo residents between the ages of 55 to 69, who obtained the AstraZeneca vaccine as the first dose.

The first consignment of the Pfizer vaccine arrived in Sri Lanka this week.

She said the CMC has now embarked on inoculating those between the ages of 55 and 69.

Senanayake said that the decision was taken because the President and she, as the Mayor of Colombo, are keen to protect the most vulnerable population. (Colombo Gazette)