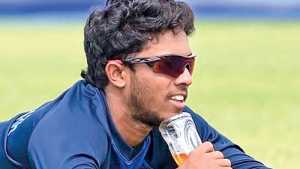 A five member panel has been appointed to investigate into the alleged misconduct of three Sri Lankan cricketers.

The Sri Lanka Cricket board said that the five member panel will inquire into the alleged misconduct of Kusal Mendis, Dhanushka Gunathilake, and Niroshan Dickwella while touring England with the national team.

The three players were suspended, from all forms of cricket, until the completion of the inquiry. (Colombo Gazette)