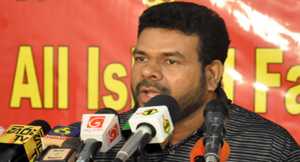 Janatha Vimukthi Peramuna (JVP) members Namal Karunaratne and Samantha Vidyaratna were arrested today after they surrendered to the Police for staging a protest in violation of the quarantine regulations.

Karunaratne, the National organiser of the All Island Govi Jana federation and former JVP Councilor Samantha Vidyaratna were arrested over a protest staged in Badulla.

As a result, the Police said that it will arrest anyone engaging in protests and public gatherings.

Dr. Asela Gunawardene has sent a letter to the Inspector General of Police (IGP) C.D. Wickramaratne with regards to recent protests held in Colombo and other parts of the country.

Gunawardene has requested the Police to crackdown on such protests. (Colombo Gazette)