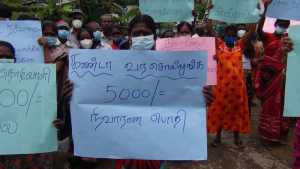 The Police are to crackdown on protests and public gatherings which are currently banned.

As a result, the Police said that it will arrest anyone engaging in protests and public gatherings.

Dr. Asela Gunawardene has sent a letter to the Inspector General of Police (IGP) C.D. Wickramaratne with regards to recent protests held in Colombo and other parts of the country.

Gunawardene has requested the Police to crackdown on such protests. (Colombo Gazette)