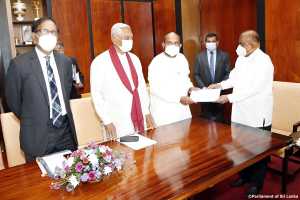 A report compiled by a committee appointed to look into the clash that took place between Government and opposition members in Parliament on April 21, was handed over to Speaker Mahinda Yapa Abeywardhane today.

The report was handed over to the Speaker by the Chairperson of the committee, Deputy Speaker Ranjith Siyambalapitiya.

Ministers Chamal Rajapaksa and MP Anura Priyadarshana Yapa who served as members of the committee and the Secretary to the Committee, Assistant Secretary General of Parliament Tikiri Jayathilake were also present at the occasion.

While claiming that the Committee had considered at length the possible adverse effects of such incidents on the entire Parliament, the Chairperson of the committee Deputy Speaker Ranjith Siyambalapitiya said that short-term and long-term measures that can be taken to prevent such incidents in the future have also been included in the report.

The Committee was appointed by the Speaker on 23rd April to recommend necessary steps that should be taken to prevent a recurrence of the situation similar to that which occurred on 21st April.