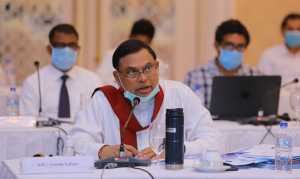 The name of former Minister Basil Rajapaksa has been submitted to the Elections Commission to fill the vacant Sri Lanka Podujana Peramuna (SLPP) National List seat in Parliament.

The Parliament media unit confirmed that Ketagoda had handed over his resignation letter to Parliament Secretary General Dhammika Dasanayake today.