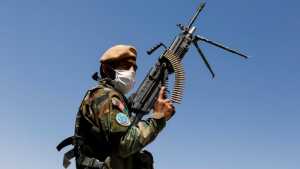 More than 1,000 Afghan soldiers have fled to neighbouring Tajikistan after clashing with Taliban militants, officials have said.

The troops retreated over the border to “save their own lives”, according to a statement by Tajikistan’s border guard.

Violence has risen in Afghanistan and the Taliban have been making significant gains, particularly in the north of the country, in recent weeks.

The surge comes as the US, UK and allies withdraw after 20 years.

The vast majority of remaining foreign forces in Afghanistan have left ahead of a September deadline. There are concerns that the Afghan military, who were supposed to take over security in the country, will collapse.

Under a deal with the Taliban, the US and its Nato allies agreed to withdraw all troops in return for a commitment by the militants not to allow any extremist group to operate in the areas they control.

But the Taliban did not agree to stop fighting Afghan forces, and now reportedly control about a third of the country.

Badakhshan and Takhar provinces, which border Tajikistan, have seen a rapid Taliban advance.

“The Taliban cut off all the roads and these people had nowhere to go but to cross the border,” one senior Afghan official told Reuters on Monday.

Zabihullah Atiq, a parliamentarian from Badakhshan, said the troops had used various routes to flee. Tajik border guards said Afghan soldiers were being provided with shelter and food, but further details were not available.

President Ashraf Ghani insists that Afghan security forces are fully capable of keeping insurgents at bay, but there have also been reports of more soldiers seeking refuge in Pakistan and Uzbekistan to escape the fighting.

Neighbouring countries are bracing themselves for a potential influx of refugees if the fighting continues to intensify.

Taliban spokesman Suhail Shaheen told the BBC the group was not responsible for the recent increase in violence. He insisted that many districts had fallen to the Taliban through mediation after Afghan soldiers refused to fight. (Courtesy BBC)