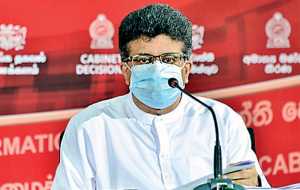 The no-confidence motion against Power and Energy Minister Udaya Gammanpila is to be debated in Parliament on 19 and 20 July.

The Committee on Parliamentary Business headed by Speaker Mahinda Yapa Abeywardena fixed the dates for the debate.

It was also decided to convene Parliament this week for four days from 06th July.

The no-confidence motion against Gammanpila was presented to Parliament on 22 June.

The motion was presented by the opposition Samagi Jana Balawegaya (SJB).

SJB General Secretary Ranjith Madduma Bandara said the motion was presented accusing the Energy Minister of being responsible for the fuel price hike.

Madduma Bandara said that the support of the Tamil National Alliance and the Janatha Vimukthi Peramuna will be sought for the motion. (Colombo Gazette)