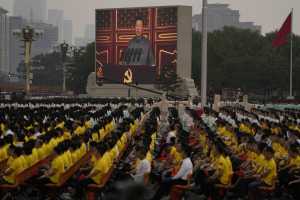 By David Crawshaw and Alicia Chen

China’s leader, just weeks after urging his nationalistic “Wolf Warrior” diplomats to play nice, hit out Thursday at unspecified “foreign forces” and said any external attempts to subjugate the country would result in “heads bashed bloody against a Great Wall of steel.”

In a speech to thousands of people in Beijing to mark 100 years since the Communist Party’s founding, President Xi Jinping struck a defiant tone as he hailed the “great rejuvenation of the Chinese nation” under the party’s guidance. He declared that the party had achieved its centenary goal of building a moderately prosperous society and solved the problem of absolute poverty, adding that nothing could divide the party and the nation.

The speech comes as Xi’s China finds itself locked in an intensifying rivalry with the United States and facing pushback against its assertive actions in the region and beyond. In a blunt message to Taiwan and its allies, Xi underscored China’s commitment to one day unify the island under Beijing’s control and vowed “resolute action” against any efforts toward what he called “Taiwan independence.”

At the same time, Beijing has faced escalating criticism over its human rights abuses, especially against Uyghur Muslims in its far-western Xinjiang region, and its dismantling of freedoms in Hong Kong. A Pew Research Center survey published this week revealed overwhelmingly unfavorable opinions of China among developed countries.

But Xi, 68, indicated he would not be swayed.

“The Chinese people have never bullied, oppressed, or enslaved the people of other countries,” he said. “At the same time, the Chinese people will never allow any foreign forces to bully, oppress or enslave us. Anyone who dares try to do that will have their heads bashed bloody against a Great Wall of steel forged by over 1.4 billion Chinese people.”

“Heads bashed bloody” became a trending topic on Weibo on Thursday, with more than 900 million views.

Thursday’s celebration at Tiananmen Square, which included a military flyover, 100-gun salute and patriotic songs, capped weeks of pageantry and nationalistic displays in the lead-up to the ruling party’s 100th anniversary.

The Communist Party was founded in Shanghai in 1921. It won victory in the Chinese Civil War in 1949 — ousting the nationalist Kuomintang, which fled to Taiwan — and has ruled the country ever since, often with an iron fist.

In the speech, Xi reiterated that it was the party’s “historic mission” to bring Taiwan under Beijing’s control. China has sharply ramped up military incursions into Taiwanese airspace in recent months, leading some analysts to warn of the potential for military conflict, perhaps even a Chinese invasion of the democratic island. Along with Beijing’s territorial claims in the South China Sea, the Taiwan dispute is a major flash point in the region.

Xi, who has eliminated limits on his time in office, has presided over steady economic growth and a rise in living standards since taking the party’s top job in late 2012. But his tenure has been marked by the rollout of a vast surveillance state in which citizens are tracked closely by the government and dissent is crushed.

The country’s economy — the world’s second-largest — has rebounded quickly from the coronavirus outbreak, with the World Bank forecasting growth of 8.5 percent this year. But China also faces many challenges, not least the demographic dual hit of a low birthrate and an aging population.

China’s diplomats have been increasingly aggressive in pushing back at Western criticism, often via social media platforms that Beijing blocks its citizens from using. But this forceful “Wolf Warrior” approach — named after a patriotic Chinese action film franchise — has rankled outsiders and has been cited as a key factor in Beijing’s diminished global image.

In recent remarks, Xi urged diplomats to create a “trustworthy, lovable and respectable” image for China, according to Bloomberg News, adding that the country needed to be “humble” as well as confident. (Washington Post)