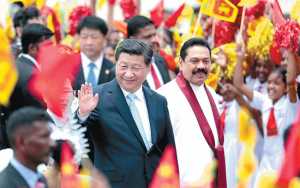 In an ideal situation, irrespective of the ideology whether it’s Capitalist, Socialist, or Communist, the core idea behind governance should always be improvement of human capital.

But in reality we often witness that the decisions taken by the leaders are influenced by both external and internal factors, in which an agenda or a compulsion may take precedence over the human cost. Leadership altering its rational decision making based on domestic compulsions is still understandable, but when a country starts making decisions based on its compulsions towards a foreign country, it regresses into the same colony which was once ruled by the imperialist powers in the 19th and 20th century.

However, despite these factors there is a visible reluctance on the part of Sri Lanka to seek assistance from the IMF and this has pushed it into a perpetual “debt seeking mode” with the Rajapaksas conveniently reaching out to Chinese Banks as the “Bank of Choice”.

This fiscal overdependence of Sri Lanka on China has converted the latter into a pressure group which has led to Sri Lanka ceding control of the Hambantota Port to China, cancellation of the Light Rail Transit System contract to Japan in favor of China, and Chinese control over the 116 hectares of land in the Colombo Port City.

Another example of the Chinese pressure affecting the Sri Lankan policy in general and public health in particular is the decision to procure 14 million doses Sinopharm vaccine at a price of US$ 15 per dose, whereas the same vaccine has been procured by Bangladesh and Nepal at the cost of US$ 10 per dose.

Further, Sputnik-V, a vaccine with almost 12% higher efficacy, is available at US$10 per dose. However, this was conveniently ignored by the powers to be. When a similar issue was raised in Brazil, it led to an independent investigation and cancellation of tender.

Whereas, in Sri Lanka the matter was brushed under the carpet by giving flimsy excuses that China has the right to determine the price of the vaccine. Not surprising as what can possibly be expected from a government which is so afraid of China that it’s Navy and Coastguard could not even inspect a private cargo ship for undeclared Uranium Hexafluoride!

Usually the public effects of debt trap are visible after one or two generations, but in the case of Sri Lanka it is obvious that an accelerated debt trap is being immediately witnessed. It is feared that Sri Lanka may soon lose the tag of a “Banana Republic” to becoming a “Chinese Colony”.

The country is also being envisaged as a vassal state of China where its own citizens will be treated as second class individuals and will have to fight not only for jobs which are rightfully theirs, but even for preserving their language, culture, religion and identity in a constant struggle for survival just like the citizens of Hong Kong today.