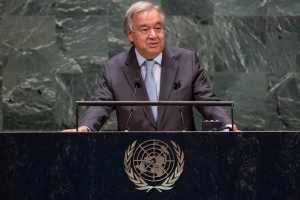 Highlighting the one-year anniversary of Hong Kong’s controversial national security law (NSL) and also focusing on mainland China’s far-western autonomous regions of Xinjiang and Tibet, Senator Jeff Merkley of Oregon and Representative Jim McGovern of Massachusetts, chairmen of the Congressional-Executive Commission on China (CECC), asked Guterres for “immediate measures to closely monitor and assess China’s behaviour”.
The law, which was imposed on Hong Kong by Beijing, “has led to the rapid deterioration of fundamental freedoms in Hong Kong … Similarly, rights abuses across China have not abated”, they said, supporting a statement on Monday by 50 independent UN human rights experts that China has broken with protocol by not allowing independent missions to investigate allegations of abuse.

In that statement – issued by the office of UN High Commissioner on Human Rights Michelle Bachelet – the UN human rights experts expressed “alarm” about “the repression of protest and democracy advocacy in [Hong Kong], impunity for excessive use of force by police, the alleged use of chemical agents against protesters, the alleged sexual harassment and assault of women protesters in police stations and the alleged harassment of health care workers”.

That statement called for other measures, including a special UN session “to evaluate the range of violations” allegedly committed by Beijing and a new “mechanism … to closely monitor, analyse and report annually on the human rights situation in China”.

Hong Kong’s national security law criminalises a range of behaviours under the broad headings of secession, subversion, terrorism and collusion with foreign powers, and has led to almost 130 arrests since its implementation, according to researchers at the Georgetown University Law Centre, with those arrested including political candidates, activists and journalists.

Hong Kong authorities also invoked the law to force the Apple Daily newspaper to close last month, freezing its assets amid an investigation into whether it had advocated for foreign sanctions.

In the CECC letter, Merkley – a Democratic sponsor of legislation that would ban all goods coming into the US from Xinjiang unless businesses can prove that they were not made using forced labour – and McGovern asked Guterres for an update on progress in instituting the UN measures or an explanation “for the failure to act”.

The CECC letter should be seen more as a reflection of the US government’s resolve to pressure China than something that will spur Guterres into action or restrain Beijing, said Dimitar Gueorguiev, an assistant professor of political science at the Maxwell School of Citizenship and Public Affairs at Syracuse University.

“Letters and appeals to [Guterres], as opposed to ambassadorial diplomacy, are more about public position-taking and signalling than they are about actual results,” he said. “The bipartisan CECC thus signals a unified position on the part of the US that the human rights situation in China remains a key area of concern, even if Beijing wants to dismiss it.”
McGovern, also a Democrat, cosponsored a bill to ban sales of riot control equipment to Hong Kong law enforcement services, a measure that was passed along with the Hong Kong Human Rights and Democracy Act.

The CECC letter also coincided with a UN Human Rights Council discussion marking the anniversary of the NSL featuring some of the statement signatories and Hong Kong activists including Nathan Law Kwun-chung.

Law was elected to Hong Kong‘s Legislative Council in 2016 and at 23 became the city’s youngest lawmaker, but was stripped of his seat in 2017 after a court found that he and several others had been insincere in taking their oaths.

Law fled to Britain in June last year, days before Beijing imposed the security law, and London granted him asylum, finding that the NSL breached the 1984 Sino-British Joint Declaration, which laid out the terms of the city’s handover in 1997.

Saita Yukio, Japan’s ambassador to the UN in Geneva, called the national security law “a major setback for Hong Kong‘s high degree of autonomy and freedom of speech and the press”, adding that “it is critical for the international community to be united in strongly urging China to respect the rights and the freedoms of Hong Kong citizens”.

All the panellists criticised the law, leaving Jiang Yingfeng, China’s minister-counsellor for human rights at the UN in Geneva, as the lone speaker in defence of Beijing’s actions.
“Twenty-four years ago, Hong Kong returned to China,” Jiang said. “It was taken away by the British invader over 100 years ago; we will not allow our people, our territory to be hurt again. That’s the purpose of Hong Kong’s national security law.
“Any attempt by the foreign forces to use Hong Kong-related issues to interfere in China’s internal affairs, to jeopardise China’s security and the development and to harm the rise of Chinese people will surely fail,” he added.

Jiang also referred to the celebration of the Chinese Communist Party’s 100th anniversary in his remarks, asserting that the ruling party wants “independence, liberation, prosperity, and the good life, including human rights” for the country.

Gueorguiev said the letter’s delivery during the CCP centenary was no accident.
“The timing of this position-taking is also worth noting,” he said. “For one, it comes at a time when [Bachelet] is under pressure to make progress on a long-delayed effort to conduct an investigation of the human rights situation in Xinjiang.