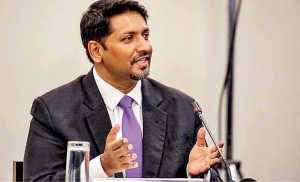 The United National Party (UNP) says it strongly condemns the current impediments to the freedom of expression of journalists and social media users.

United National Party (UNP) Deputy Leader Ruwan Wijewardene said that over the years, journalists as well as social media users have been subjected to criticism and indirect threats from the state and top police officials.

“Therefore, we would like to remind you that the UNP has stood for the protection of the right of freedom of expression for journalists and social media users throughout history and will continue to do so in the future. Many have forgotten that it was the UNP leader, Ranil Wickremesinghe, who committed himself to removing the criminal defamation law that persecuted journalists,” he said in a statement.

Wijewardene noted that journalist Tharindu Eranga Jayawardena is the newest member of the group who has witnessed their right to free speech threatened.

“The response of the Senior DIG in charge of the Western Province Deshabandu Tennakoon to a news item this journalist shared on Facebook on the 1st of this month is not appropriate for a police officer,” he said.

Wijewardene said that it is clear from the statements made by the Senior DIG regarding the news that this journalist’s right to freedom of expression has been indirectly affected.

“Therefore, we urge the government to allow journalists, who are considered the fourth state of Democracy, to carry out their duties freely. If Tharindu Eranga Jayawardena has published a false news item on his website or insulted anyone, this matter can be clarified and legal action sought. However, no party has the right to threaten, intentionally or unintentionally, any individual in exercising this freedom,” Wijewardene said.

By doing so, Wijewardene said that a high-ranking officer in the police department is more likely to influence lower-ranking officers as well, presuming that this young journalist is guilty.

The UNP called on President Gotabhaya Rajapaksa and Minister of Public Security, Rear Admiral Sarath Weerasekara to conduct a formal, impartial inquiry into this matter.

Wijewardene also requested Minister Keheliya Rambukwella as the Minister of Mass Media to ensure the safety of all journalists. (Colombo Gazette)

SLPP insists no move to make Ranil the Prime Minister