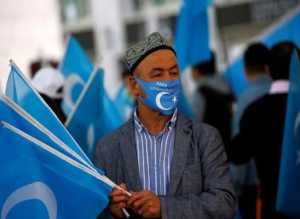 Radio Free Asia (RFA) reported that Wahitjan, who was linked to terrorism by Chinese state-run media, was arrested in 2016 amid a deepening crackdown by Chinese authorities on intellectuals in Xinjiang, as part of a deliberate campaign to undermine the Uyghur culture, religion and language under the pretext of fighting extremism.

The 58-year-old Wahitjan is a prolific poet who has penned hundreds of works admired in both Xinjiang and the rest of China and was a senior editor at Xinjiang Education Publishing House.

A Chinese documentary released later described Wahitjan and literary critic Yalqun Rozi as “two editors with radical separatist thoughts” and made no mention of the punishments handed to them.

After the documentary aired, two of Wahitjan’s supporters — Abdushukur Muhammat, a Uyghur intellectual based in Sweden who knows the poet and his works, and Alimjan Inayet, a prominent Uyghur professor in Turkey — collaborated with the detained poet’s Turkey-based daughter, Aykanat Wahitjan, to launch a “Freedom for Poet Wahitjan Osman” campaign on Facebook.

“At this point there have been many different social media campaigns about detained Uyghur intellectuals, but there hasn’t yet been a campaign for Wahitjan Osman,” said Abdushukur.

“Because I know Wahitjan Osman well, and because he is an especially capable person among Uyghur elites, and because I don’t want our elites to be forgotten, I want other people to pay attention to them like we do,” he added.

More than 500 of Wahitjan’s poems were published in various newspapers and journals in Xinjiang from 1985 until the time of his arrest and over 40 of them had been set to music and sung in popular song, RFA reported.

Alimjan said that he was deeply saddened by the disappearance of Wahitjan and said that nowhere else in the world are intellectuals called “terrorists” and imprisoned on account of what they have written in textbooks.

The crackdown that claimed Wahitjan and his colleagues followed a “strike hard” campaign in 2014 targeting Uyghurs and other Turkic Muslim minorities in Xinjiang to combat violent religious extremism. Those efforts were ramped up after Chinese Communist Party (CCP) Secretary Chen Quanguo and ushered in a policy of mass arbitrary detentions in “re-education” camps that have handled an estimated 1.8 million people since 2017.

The sweeping purge of intellectuals — as well as the camps, forced labour, and other abuses — are among serious human rights problems that have been cited as evidence of genocide of the Uyghurs by the US government and some European parliaments this year as international scrutiny mounts.

Yet, China angrily rejects genocide accusations and says the camps are vocational training facilities to combat terrorism in the region. Government documents and detailed reports by credible news organizations and rights groups indicate extensive and systematic suppression of the Uyghurs by Chinese authorities.

Wahitjan’s daughter, Aykanat, told RFA that she first learned of her father’s detention from a list of detained Uyghur intellectuals that had been published on social media.

“In addition to that, they also gave the reason why he was arrested, but they didn’t say anything other than that,” she said. “Nothing about how many years [he was sentenced to] — nothing else.”

“We urge China to allow immediate, meaningful and unfettered access to Xinjiang for independent observers,” Canada’s Ambassador and Permanent Representative to the UN in Geneva Leslie Norton said at the UNHRC meeting on behalf of 40 countries. The statement was backed by major countries Germany, France, Italy, Japan, Australia, Britain, Spain and the United States, among others. (ANI)