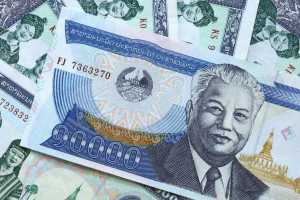 This week Laos redeemed a US$150 million bond listed on the Singapore Exchange, chipping away only slightly at its ballooning external debt owed over the next five years.

The $150 million bond, sold on the international market with a 6.875% interest rate, was the first of three sovereign bonds falling due this year. Two Thai baht denominated bonds worth 5 billion baht ($156 million) will fall due in October and November.

“If you look at their credit history they have never defaulted,” said Adisorn Singhasacha, CEO of Twin Pine Group, a Bangkok-based financial advisory company that has arranged seven sovereign bonds for Laos and corporate bonds for national power producer EDL-Gen since introducing the neighboring country to Thailand’s capital market in 2013.

Twin Pine’s pioneering of the Lao bond market was made possible by Thailand’s relaxation on sovereign bonds issues in 2012, when it scrapped a requirement that foreign issuers must have an investment-grade sovereign credit rating to be sold on the Thai capital market.

The requirement was blocking Thailand’s ambitions to become a financial hub for the so-called CLMV (Cambodia, Laos, Myanmar, Vietnam) region, none of which have investment-grade ratings according to international credit rating agencies such as Fitch, Moody’s and Standard & Poor’s.

Indeed, Laos had no international credit rating at all in 2013, when it first started issuing bonds on the Thai market, but that didn’t stop Thai investors from buying in at a 4.5% interest rate.

Between 2013 to 2018, the Lao Finance Ministry issued about US$1.6 billion worth of both Thai baht and US dollar sovereign bonds on the Thai market, selling primarily to institutional and high-net-worth auctions managed by Twin Pine. Besides Twin Pine, New York-based Oppenheimer Holdings is the only other large player in the Lao bond market, though with only one issuance to date.

Thai investors used to have good reason to be confident in Laos redeeming its bonds.

“It was based on the Laos growth story,” Adisorn said. “Laos’ growth has been quite resilient because as a frontier market they are really not part of the global economy, so they were unphased by the 2007-8 crisis and have been growing at a pace of 7% a year. They have the electricity exports story, a young population and consumption.”

One of Laos’ main exports is electricity generated by hydro-power plants feeding off the mountainous country’s vast water reserves, many of which were built by Thai energy firms and financed by Thai banks. The electricity is sold mainly to the state-run Electricity Generating Authority of Thailand (EGAT).

But the Covid-19 pandemic has taken some of the shine out of Laos’ previously bright power export prospects.

Last year, Thailand experienced a 40% surplus in its power supply capacity, as Covid-19 knocked the economy’s lights out, leading to a 6.1% economic contraction. That, in turn, has raised questions about EGAT’s appetite for more hydropower from Laos in the future, analysts say.

In 2020, Laos’ gross domestic product (GDP) contracted 0.5%, but is forecast to recover to 4.0% growth this year, according to World Bank estimates.

The economic slowdown in 2020 came at a time when Laos’ public debt was on the rise, reaching 72% of GDP according to Lao government estimates last year, and with big loans falling due.

In August 2020, Moody’s downgraded its sovereign rating for Laos to Caa2 with a negative outlook to reflect its growing concerns about the double whammy of falling foreign exchange reserves and rising debt. Fitch followed suit in September 2020, downgrading its Laos rating to CCC from B-.

“Our key rating concern for Laos, and the reason for the rating at CCC which by our definition indicates that default is a possibility, is the country’s external finances,” said Jeremy Zook, Fitch’s lead analyst for Laos. “Laos does have a very challenging external debt repayment schedule, with just over $1 billion coming due per year over the next five years,” he told a recent Fitch forum.

Such ratings are likely a self-fulfilling prophesy since they make it harder for Laos to raise new bonds on the international market to repay those coming due. Oppenheimer attempted to raise a $350 million Laos bond on the Singapore market earlier this year and failed to garner enough investor interest. Twin Pine has not arranged any new Thai baht bonds since 2018.

“What we are hoping for is at least the reversal of the negative outlook,” Adisorn said. “I think there will be enough data coming in over the next few months that you can actually form a better opinion of where things are going.”

But this was partly due to a central bank-to-central bank “swap line” established between the Bank of Laos and the People’s Bank of China in January. The swap pumped renminbi into the Lao central bank, theoretically as a prepayment for Chinese imports, thus boosting Laos’ foreign exchange reserves, analysts said. Over half of Laos’ external debt is held by China.

Laos also enjoyed a 32% jump in exports during the first four months of 2021, driven primarily by gold, pulp and paper, bananas, cassava and electronic parts, according to government data.

While Laos has handled the Covid crisis relatively well, the country is suffering a second wave of the pandemic, forcing the government to announce a lockdown on April 21 until July 4.

The Covid crisis had already taken the wind out of Laos’ previously budding tourism industry, which formerly accounted for about 10% of GDP and has now disappeared.

As of June 20, Laos had vaccinated 780,552 people with a single dose, and 461,632 had received a second jab. With generous donations of vaccines including Sputnik (Russian), Sinopharm (China) AstraZeneca (UK) and Pfizer (US) granted by donors and WHO’s COVAX facility, it hopes to have vaccinated 50% of its population, or 3.5 million people, by year-end 2021.

The future of the Lao economy, and its fiscal stability, hinges greatly on mainland China.

“Half of the upcoming debt payments in the next five years is coming due in China, so whether China supplied re-financing or delays some of the debt repayments will be a critical factor, in our consideration, for debt sustainability,” said Fitch’s Zook.

A portion of the upcoming debt will be due to the Export Import Bank of China, which has extended a concessionary loan at a 2.5% interest rate for $470 million as part of Laos’ contribution to the Lao-China Railway project.

The 414-kilometer, medium-speed train, joining southern China to Vientiane, is scheduled to open on December 2 this year. Sources in Vientiane say the deadline has not been delayed despite disruptions to construction caused by the Covid crisis last year.

December 2, 2021, will mark the 46th anniversary of the Lao People’s Democratic Republic, i.e. the one-party communist system that has prevailed in the country since 1975.

The rail link is owned by a joint venture – the Laos China Railway Company – set up in 2016, in which Laos holds 30% and China 70%. The project has an estimated cost of $6 billion, but Laos’ debt portion of the project is about 8% of the total investment, still large for a country whose total GDP is only $18 billion.

Under the joint venture agreement, Laos’ cash commitment to the project is $720 million, of which $250 million derives from the national budget during the five-year construction period, and the remaining $470 was borrowed from the EXIM Bank of China with a five-year grace period and 35-year maturity.

One should expect more such “joint ventures” in the future as Laos’ seeks to avoid debt, which might be a bad thing for the Lao people who are displaced by such projects without adequate compensation but might be an overall good thing for the economy.

“Laos is focusing more on equity financing, which in our view could alleviate some of their liquidity risks and be positive for ratings,” said Fitch’s Zook.

In March this year, for instance, the EDL national power company entered a joint venture with the state-owned China Southern Power Grid Company to build and manage a large portion of the national electricity grid over the next 25 years before being handed back to the Lao government.

EDL’s percentage in the venture is estimated at 10% in the form of its existing grid assets, giving the China Southern Power Grid a controlling share in setting prices and making deals with neighbors. The $2 billion project has the goal of achieving Laos’ long-held ambition to become the “battery of Southeast Asia,” with transmission lines extending to its neighbors.

“So they get the twin benefits of 1) allowing Laos to connect north-south, east-west and truly become the battery of Southeast Asia and 2) it doesn’t put a debt burden on the country,” said Twin Pine’s Adisorn.

Such concessions come at the cost of handing over Laos’ national assets to China, albeit for a limited period, but they do avoid further debt, much of which is already owed to China.

“China is obviously a huge player in Laos with about 50% of upcoming debt repayment in coming years are due to China,” noted Fitch’s Zook. “So whether China steps in to provide more finance for Laos is very central to our rating and that’s something that is a bit difficult for us to monitor.” (Courtesy Asia Times)