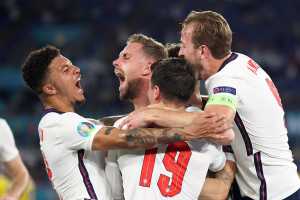 England produced a magnificent display as they thrashed Ukraine in Rome to set up a Euro 2020 semi-final against Denmark at Wembley.

Manager Gareth Southgate’s side followed up the landmark victory over Germany in the last 16 by producing a performance of composure and the highest quality to continue their impressive progress in this tournament.

Harry Kane was back to his predatory best after struggling in the group stage, following up his goal against Germany by poking home a superb pass from Raheem Sterling after only four minutes.

Ukraine barely threatened and England – having reached the last four at the 2018 World Cup – were on their way to a second successive semi-final when Harry Maguire powered home a header from Luke Shaw’s free-kick seconds after the break.

And the outstanding Shaw was the creator once more four minutes later with a perfect cross that was headed in from six yards by Kane.

England were so impressive as they simply overpowered Ukraine with substitute Jordan Henderson getting the fourth – his first international goal, in his 62nd appearance – when he arrived with perfect timing to head in Mason Mount’s corner.

To add to England and Southgate’s satisfaction, they kept their fifth successive clean sheet to maintain their record of not conceding a goal at Euro 2020.

They will now meet Denmark in the last four at Wembley on Wednesday (20:00 BST kick-off).

England manager Southgate never wavered for a second in his belief that captain Kane would have a significant impact on Euro 2020, even when he looked off the pace and out of sorts when failing to score in group games against Croatia, Scotland and the Czech Republic.

Southgate’s faith was rewarded when Kane got off the mark with England’s crucial second in the 2-0 win over Germany. It was the catalyst for the real Kane to come alive in the tournament – and he punished Ukraine in trademark style.

Kane pounced for his first, rose to power in a second for his 47th England goal and almost completed a hat-trick in spectacular fashion with a left-foot volley that was turned on to the post by Ukraine keeper Georgi Bushchan.

He was a constant threat, his link with Sterling increasingly impressive, and has timed his return to peak form perfectly as England now stand only 90 minutes away from their first major final since they won the World Cup in 1966.

Kane is the man defences fear – and even the in-form Danes will regard this display as ominous. (Courtesy BBC)