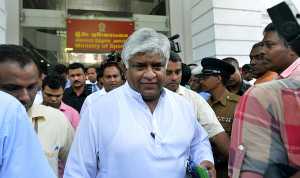 The Sri Lanka Cricket board insisted that the Indian team currently touring Sri Lanka is a strong squad.

“Out of the 20-member India squad, 14 players have represented India across all formats or in some form. (Test, ODI, or T20i), and is not a second string team as claimed,” the Sri Lanka Cricket Board said.

The Sri Lanka Cricket board also said that the tour is taking place, whilst the National Test team of India is touring England to play a 05 match test series.

“This is the latest norm in the cricketing world, especially the full ICC Member countries, as they maintain specialist squads and players for each format of the game. The aim of such arrangements is to be competitive in each format of the game by maintaining specialist players and squads. Apart from it, maintaining separate squads enable cricketing boards to fulfill their international commitments unhindered, such as the ICC Future Tours Program,” the Sri Lanka Cricket Board said.

Ranatunga had criticised the Sri Lanka Cricket board for agreeing to host a second-string Indian team and described it as an insult. (Colombo Gazette)