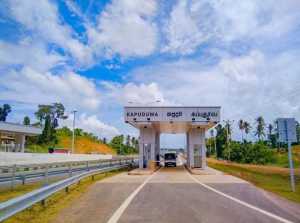 Prime Minister Mahinda Rajapaksa today declared open the Kapuduwa Interchange on the Southern Expressway and the Gatambe Underpass in Peradeniya.

The Kapuduwa Interchange and the Gatambe Underpass were declared open virtually while the foundation stone to construct the Maritime Facilitation Centre at the Colombo Fort was also placed today.

The three projects were implemented according to the President’s Vision of Prosperity policy of building the country under the theme ‘An End to Congestion – A Space for Comfort’.

The cost of the Kapuduwa Interchange Center was reported to cost Rs. 445 million while the underpass in front of the Peradeniya Hospital cost Rs. 127 million.