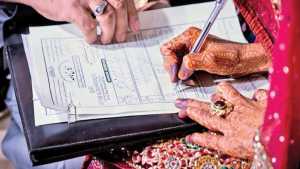 The All Ceylon Jamiyyathul Ulama (ACJU) has raised concerns over the proposals made by the Cabinet on the Muslim Marriage and Divorce Act (MMDA).

The ACJU says Muslim Family Laws were in practice in Sri Lanka throughout history of more than 1000 years among the Muslim community in accordance to the Islamic Religious teachings and cultural practices.

These customary laws were codified and implemented since the Dutch and English colonial eras and post–independence period until today and were subjected to amendments time to time as required upon due consultation from community representatives as it was related to the Muslim community’s religious and cultural affairs.

In this context, the ACJU says it agrees that certain reforms are needed in terms of the Muslim Marriage and Divorce Act. Especially the grievances of the Muslim women should be addressed through these reforms.

“Since this matter is concerning religion followed by the Muslims, our stance is that, the appropriate reforms are required to be made considering the fundamental teachings of the religion, and upon due consultation of the concerned stakeholders by taking their views into consideration. Accordingly, the ACJU has presented its submissions on the necessary reforms in the prevalent Muslim Personal Laws on various occasions,” the ACJU said.

However, the ACJU says it is saddening that the Cabinet of Ministers had proceeded to take some decisions with regard to the Muslim Marriage and Divorce Act, without taking into consideration the opinions given by Islamic religious and civil organizations. The ACJU expressed its displeasure and distress with regard to this matter.

The ACJU has requested the Government and the Minister of Justice, to reevaluate the above decisions made by the Cabinet of Ministers, by adhering to an inclusive decision making process, while giving due consideration to the fundamentals of the religion with regard to this matter and honoring the rights of all citizens of the country, in order to ensure that no one is served injustice and the multicultural diversity of our nation is upheld.

The ACJU reiterated that it will support every decision that is taken based on the above mentioned criteria, in the best interest and development of the country and the Sri Lankan Muslim community. (Colombo Gazette)