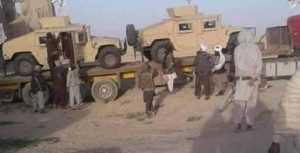 KABUL, June 27 [Afghanistan Times]: With the U.S.-led forces withdrawing and the Taliban expanding foothold, fears are mounting that the militants are shipping out what they steal from Afghan security forces to Pakistan including armored tanks and huge caches of arsenal.

A senior Afghan security official has claimed that the country’s military equipment including tanks and weapons is ending up with Pakistan as the Taliban are trying to send away their lootings there.

Mirzakwal said the National Security Council and the commander in chief have ordered permanent patrols to target any military gear bound for Pakistan.

This happens against the backdrop of the Taliban’s territorial gains across Afghanistan as they have captured a constellation of district centres, security outposts and military bases which house dozens of vehicles, military tanks and ammunitions.

Speaking at the same event, another official said that some military equipment has been transferred across the Durand Line to Pakistan. “There is evidence and video footage proving that the Taliban are shipping out our military equipment to Pakistan,” said Shamim Khan Katawazai, head of the Independent Directorate of Local Governance.

Paktia has become the hotbed of the Taliban in recent weeks. Heavy fighting continues in Paktia province with security forces having reversed some of Taliban gains by recapturing Ahmad Abad and Mirzaka districts. Paktia officials have said they have captured Pakistani nationals who fought in the Taliban ranks.

Paktia’s Mirzaka district fell to the Taliban last week and the insurgents had destroyed most of the district centre including government buildings. Local officials said the Taliban had set ablaze many security outposts and destroyed some roads there. Military officials including the 203 Corps Commander Gen. Jalaluddin Yaftali have said military operations continued in the province to retake seven Paktia districts that had fallen to the militants. [Afghanistan Times]