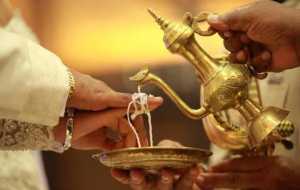 The Police raided a wedding ceremony held in the Panadura area, in violation of the quarantine laws, the Police media unit said.

He said that the registration of weddings is permitted with a maximum of only 10 participants.

DIG Ajith Rohana said the Police and Public Health Inspectors raided a wedding held in violation of the health guidelines in Panadura.

He said that 12 men and 8 women were placed under quarantine at the venue for 14 days.

The Police Spokesman said that legal action will be taken against the accused after they complete their quarantine. (Colombo Gazette)