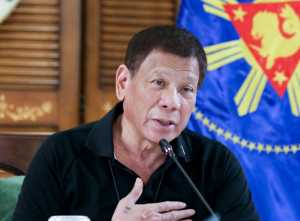 This was Duterte’s response to the invitation of Sri Lankan President Gotabaya Rajapaksa to visit his country in a phone call on Monday (June 28), according to a press statement from the Office of the President.

During the phone call, the two leaders renewed their shared commitment to further enhance cooperation as the two countries commemorate 60 years of diplomatic relations this year.

“Over the last six decades we have pursued fruitful relations. We look forward to sustaining this and exploring further the full potential of our cooperative ties,” Duterte was quoted as saying.

He conveyed the Philippine government’s interest to further strengthen engagement with Sri Lanka in the United Nations (UN) on issues of common interest.

Duterte also thanked the Sri Lankan government for its assistance in the repatriation of Filipinos amid the pandemic and for the safe return of Filipino seafarers in the MT New Diamond that caught fire off the eastern coast of Sri Lanka in September last year.

Reports showed that one Filipino crew member died “in a boiler explosion” while another was injured after a fire broke out on the large oil tanker off the eastern coast of Sri Lanka.

Rajapaksa, for his part, extended deepest appreciation for the cooperation and mutual support between Sri Lanka and the Philippines in multilateral venues, including at the United Nations Human Rights.

The two leaders committed to explore new opportunities for bilateral cooperation, particularly in the areas of security and defense, trade and investment, labor migration, and tourism.

They also agreed that combatting Covid-19 is a shared responsibility and an opportunity to work in solidarity with all nations.

Sri Lanka is currently among the countries included in the Philippines’ travel ban until July 15 to prevent the possible entry of the Delta Covid-19 variant.

Other countries are India, Pakistan, Nepal, Bangladesh, Oman, and the United Arab Emirates.

The Philippines has so far reported a total of 17 Delta cases that originated in India.